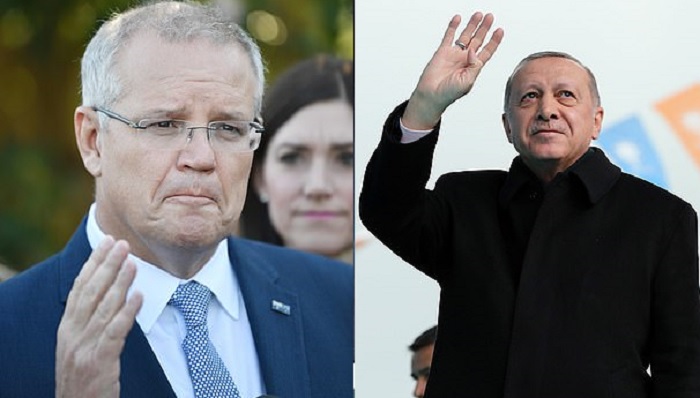 Morrison warned that “all options are on the table” due to the offensive remarks, and added that Australia will review its travel advisory for Turkey.

This threat could mean that Australians would be directed not to travel to Turkey for Anzac Day commemorations at Gallipoli, which are attended by thousands every year on April 25.

In inflammatory comments he made on Monday, Erdoğan suggested that anyone who comes to Turkey with anti-Muslim sentiments would be sent back in coffins, “like their grandfathers were” during the Gallipoli campaign.

Morrison summoned the Turkish ambassador to Australia on Wednesday. He then called a press conference to announce that he does not “accept the excuses that have been offered” for the comments — that they were said “in the heat of the moment … in an electoral context.”

Morrison labelled the comments “highly offensive … and highly reckless in this very sensitive environment,” adding that they “insult the memory of the Anzacs.” The Australian PM also said the inflammatory remarks “violate the pledge that is etched in the stone at Gallipoli” by the founder of modern Turkey, Mustafa Kemal Atatürk.

That was a reference to an inscription at Anzac Cove in Gallipoli, which has been attributed to Atatürk, saying that soldiers buried there are “lying in the soil of a friendly country.” The inscription also states that “after having lost their lives on this land, they have become our sons as well.”