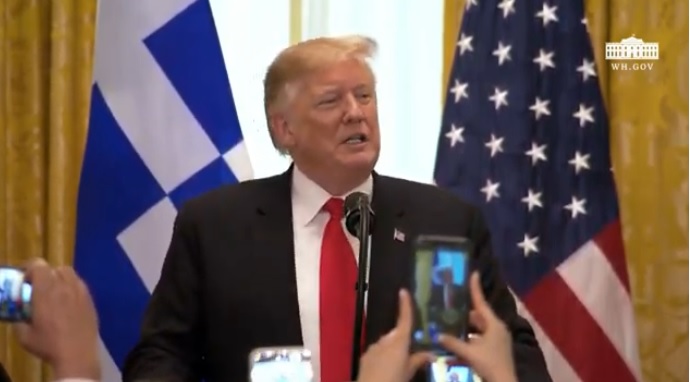 United States President Donald Trump hosted his third Greek Independence Day celebration at the White House on Monday, March 18, 2019 to honor the men and women who fought for Greece’s independence from the Ottoman Empire.

“Today we commemorate the Greeks’ long struggle to regain their independence from a foreign empire,” the President said in his remarks.

“This evening we also celebrate the countless ways Greek Americans strengthened our nation… You live by the values that are the foundations of America’s greatness.

You really do. You honor hard work. You love your families. You enrich your culture. And you embrace the American Dream and you keep faith in the blessings of Almighty God.”

“The US and all western civilization have been profoundly shaped by the extraordinary achievements of the Greek people stretching all the way back to the ancient times,” the President added.

“Greek poets and philosophers like Homer and Aristotle have helped humanity pursue truth, and virtue, and justice. Ancient Greece achieved extraordinary feats of architecture, geometry, map-making, and so much else that has inspired all wonders of the world. And Greece is the birthplace of democracy. Have you heard that?”, Trump asked the audience, which replied with sustained applause.

He also praised all Greek Americans who have served in the US armed forces. “In every generation, Greek Americans have summoned the courage to defend our freedom,” he said.

The President singled out from the audience the first generation Greek American George Marafatsos, who was born in Sparta and became a successful entrepreneur in the US, a personification of the American dream.

“When he was 10, his family immigrated to the United States. He earned money — a lot of money — helping out his grandfather’s barbershop. Today, George has built a successful construction business and has served for more than 30 years as a parish council member at Saints Constantine and Helen Greek Orthodox Church in Silver Spring, Maryland,” President Trump noted.

Many Greeks, Greek Americans and Americans attended the ceremony at the White House, continuing the tradition which began in 1987, during the administration of President Ronald Reagan.

After the White House celebration the crowd headed to the historic Willard Hotel to attend a reception organised by the National Hellenic Society.

The Society actively supports programs sponsored by universities, colleges and educational institutions throughout the U.S. that demonstrate a common interest in preserving, promoting and enjoying for posterity, education, the sciences, arts, music, culture, history, philosophy, democracy and related legacies derived from and through the ancient Hellenic era to the present.