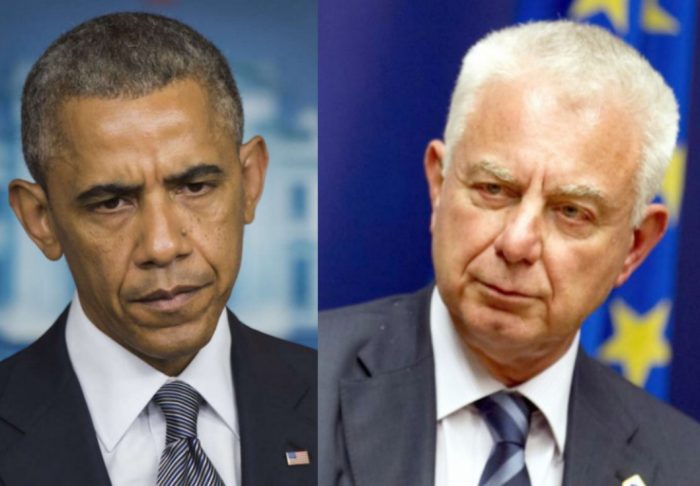 The former caretaker Prime Minister of Greece, Panagiotis Pikrammenos, admitted that he sent a letter to Barack Obama in 2012, asking him to intervene in order to prevent the imposition of capital controls in Greece. The startling admission came during a panel discussion which took place on Wednesday in Athens.
Speaking in front of an audience at the American College of Greece on Wednesday evening, Pikrammenos said that on the eve of the crucial June 17, 2012 election, he wrote a letter to  then-President of the United States, Barack Obama.
In his letter, Pikrammenos asked the American president to intervene and persuade the European Central Bank and key political figures to avoid imposing capital controls on the Greek banks, saving the country’s position in the Eurozone.
Barack Obama allegedly read Pikrammenos’ letter on board Air Force One, while he was traveling to Mexico to attend the G20 Summit.
The US played a crucial role during the following years in safeguarding Greece’s position within the Eurozone.
US officials mediated between Greece and its European partners both in 2012 and in 2015, when the crisis reached its most critical moments, in order to avoid the worst-case scenario of a Greek exit from the Eurozone, known as ”Grexit.”
According to the experts who spoke during Wednesday’s panel, titled ”The US Role in the Greek Debt Crisis,” the Obama administration did not want Greece to fall into chaos under any circumstances whatsoever. The thinking at the time was that this might well precipitate a financial crisis across the EU, and possibly even in the US as well.
Because of this fear, senior American officials including Jack Lew, Obama’s Treasury Secretary, intervened numerous times to press European Union officials and the Greek authorities to compromise to safeguard Greece’s position in the Eurozone.
Panagiotis Pikrammenos, who made the revelation this week, is a Greek judge who served as president of Greece’s Council of State. He served as a caretaker prime minister of the country from May 16 until June 20, 2012, because the results of the May, 2012 election did not allow the formation of a government.