At Least Two Injured in Day of Violence in Greece (video) 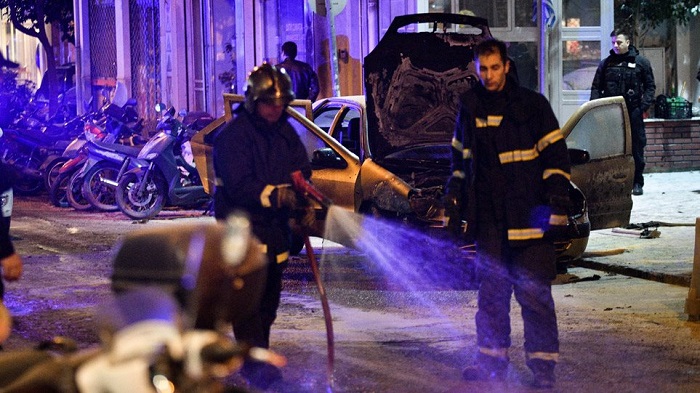 Saturday was marked by serious disturbances in various locations in Athens and Thessaloniki as anarchists and disruptive football fans clashed with the police.
A group of about 40 people threw petrol bombs at the Acropolis Police Station at around 11:40 on Saturday night.
The facade of the station at Veikou Street in Koukaki was damaged before the perpetrators fled.
There were no reports of injury. Police arrested 10 suspects.
A few hours earlier clashes between rival groups erupted on Petrou Ralli Street. Police used tear gas to separate the two sets of supporters who were throwing rocks at each other.
One vehicle was burned in the ensuing melee. Sixteen suspects were arrested.


Also on Saturday, two people were injured when a large group of people stormed an indoor swimming pool where a women’s water polo match between Olympiacos and Glyfada was taking place.
Approximately 30 people wearing helmets and carrying clubs and flares invaded the swimming pool and attacked opposing fans before police arrived.

Thessaloniki disturbances
A group of around 50 hooded attackers threw petrol bombs at police forces stationed near the Turkish consulate, on St Demetriou Street in Thessaloniki.
Police responded with tear gas, forcing the group to back off inside the university building nearby.
15 suspects have been arrested.