By Tasos Kokkinidis
February 26, 2019
Facebook
Twitter
WhatsApp
Linkedin
Email
Four regions in Greece were included in the list of the poorest in Europe, according to a report from Eurostat, the EU’s statistical office, which was published on Tuesday.
East Macedonia-Thrace, Epirus, the North Aegean and West Macedonia all have GDP numbers per capita which are below 50 percent of the EU average.
The poorest area in Greece, East Macedonia-Thrace, occupies eleventh place amongst the poorest twenty EU regions. Area residents there have only 46 percent of the EU-average GDP per capita.
East Macedonia-Thrace is followed by Epirus and the North Aegean, who both occupy thirteenth place, with residents having only 48 percent of the EU average, and West Macedonia is in seventeenth place, with 49 percent.
The poorest region in the entire EU is northwestern Bulgaria, where residents earn 31 percent of the average, followed by Mayotte in France and north-central Bulgaria, both at 34 percent. Another region in Bulgaria, the South-Central area of the country, reports residents earn 35 percent of GDP.
The leading regions in the ranking of regional GDP per capita in 2017, after Inner London – West in the United Kingdom, where residents earned a whopping 626 percent of the average, were Luxembourg, at 253 percent, and Southern Ireland, at 220 percent.
These areas were followed by Hamburg, Germany, at 202 percent, the Brussels region in Belgium, at 196 percent, and the Eastern & Midlands of Ireland, at 189 percent.
Prague, in the Czech Republic, followed these areas with 187 percent. 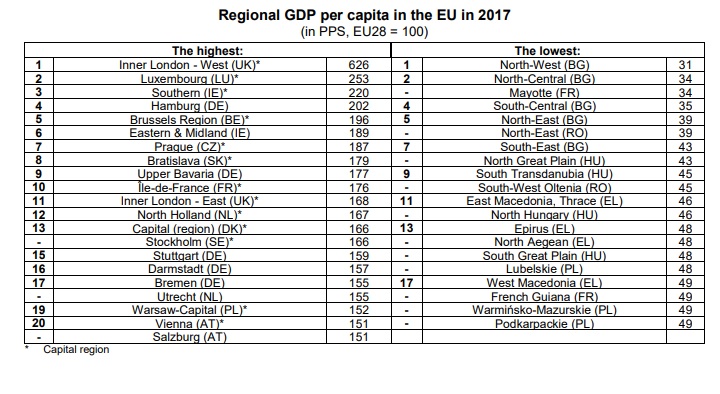