Acropolis Obscured: Greeks Angry at Construction Near the "Holy Rock" 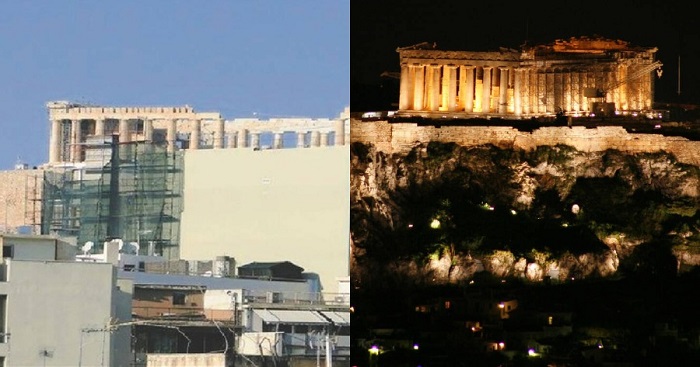 Two new buildings under construction near the Acropolis have caused a public outrage because their height has already blocked some views of the ancient Greek monument.
The two ten-story hotels under construction are near the Acropolis Museum in the Koukaki neighborhood. Their thirty-meter height has already obscured views of the hill of the Acropolis.
Both hotels are within the broader archaeological area of the Acropolis and the Parthenon, the World Heritage monuments which are the ultimate symbols of Greece itself.
According to the Avaaz petition platform, so far over 10,000 area residents and others have signed a petition to block further construction work. The Greek Ministry of Culture will now be forced to take a stand on the development.
The Ministry of Environment and Energy, which is responsible for urban planning and for granting construction permits, also reacted after the complaints and petition. General Director of Urban Planning Dora Galani has set up a four-member working group to review the building permit regulations in the area in order to resolve the problem as soon as possible.
The group will work in cooperation with representatives from the Ministry of Culture and the City of Athens. The members will be convening on a regular basis and will be taking into consideration the views of area residents.
The two alternatives the Ministry of Environment and Energy is considering are to change building regulations in the area, or call for a reduction of the buildings’ height by ministerial decree.
On Wednesday, Minister of Culture and Sports Myrsini Zorba stated “The view (of Acropolis or any other monument) is a cultural asset and can not under any circumstances become the privilege of the few.”
Giorgos Stathakis, the Greek Minister of Environment and Energy, declared, “The city of Athens is a self-evident point of reference in the collective effort for the country’s social, environmental and economic reconstruction after many years of (economic) crisis.”
Building construction in the city of Athens requires, among other things, a special permit by the Central Archaeological Council (KAS). The construction of both hotels will now be reviewed by KAS.
The two buildings in question are on Falirou Street and Misaraliotou Street, both several dozen meters away from the Acropolis Museum. The ten-story hotel on Falirou Street is near completion.
In both cases, the constructors took advantage of the 2012 urban planning law that allows buildings to go up 32 meters in height (instead of 27 previously) provided that the extra meters will be used for “green architecture”.
The archaeological services as part of KAS have no jurisdiction over the height of the buildings beyond Rovertou Gali Street. However, they do have jurisdiction over whether the “antiquity rescue” excavations were conducted correctly. This is why the approval of the organization was needed for the Falirou Street hotel.
According to the Ministry of Culture, the KAS will review the complaints of area residents regarding both the hotels.

Throughout history, a plague, or pandemic, has affected the outcome of Ancient Greek wars, as studies by historians and medical scientists suggest
Greek News

A prosecutor in Greece ordered a probe, following allegations claiming sexual harassment of young athletes by coaches in gymnastics.