The Five Most Romantic Places to Celebrate Valentine's Day in Athens 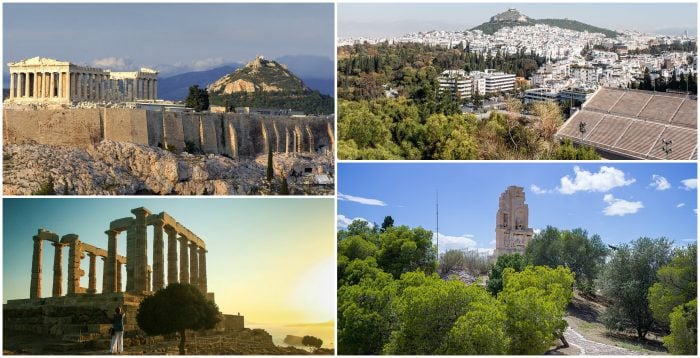 On Valentine’s day, the beautiful city of Athens offers some uniquely romantic spots to you and your partner to celebrate the special day.
As many couples decide to spend some quality time far from busy city centers, Athens has at least five places which could be ideal for a short escape.


5. Cape Sounio
Cape Sounio forms the southernmost tip of the Attic peninsula, 8 kilometers (5.0 miles) south of the town of Lavrio and 70 kilometres (43 miles) southeast of the city center of Athens.
With its incomparable sunsets, marvelous views of the Saronic Gulf and the lights of the city of Athens just opposite, Sounio is the ideal destination for a couple who would like to enjoy a relaxed and romantic atmosphere far from the busy city.

4. Strefi Hill
Strefi Hill is located in the neighborhood of Exarcheia in central Athens. The hill once belonged to the Strefis family, from which it took its name. In 1963, the Strefis family handed over the ownership of the hill to the city of Athens. To get there, take a stroll among Athens’ most beautiful buildings, all outstanding examples of neoclassical architecture.
You will feel like you’ve entered a different era in time. The vista spread out before you, with pine-covered hills, affords you a very different view of the city, making it a must-see on a Valentine’s Day.

3. Ardittos Hill
Overlooking the stunning Panathenaic Stadium (Kallimarmaro), where the first modern Olympic Games were held in 1896, Ardittos Hill is located on the eastern side of the ancient river of Illysos.
The hill takes its name from the mythical local hero Ardittos, who was gifted with the ability to solve conflicts. As the hill has a park full of pine trees and other lush Mediterranean vegetation, it offers a beautiful escape from Athens’ city center, with stunning views and beautiful paths.

2. Philopappou Hill
Philopappou or Filopappou, also called the Hill of the Muses, along with the Hills of the Pnyx and the Nymphs, located next to it, is a pine-shaded spot that’s good for a long stroll, especially in the evening. It also offers stunning views over the city of Athens.
The hill also affords some of the best areas for taking photos of the holy mountain of the Acropolis, and its paths offer a great opportunity for couples who want to spend some quality time together, overlooking the busy Greek capital.

1. Mount Lycabettus
Probably the most famous and popular hill in Athens, Lycabettus is a 300-meter (900 feet) high hill in downtown Athens. It is the highest peak overlooking the Attica basin, and offers unique views from its top.
It is considered an oasis in the middle of the city, with its steep slopes covered in pines and Mediterranean shrubs. A large open-air theater on the top of the hill hosts a variety of cultural events throughout the summer.
With views of Saint George’s chapel on top and its “sine qua non” traditional church-bell tower, a romantic stroll on Lycabettus will definitely be one of your most unforgettable experiences. You can get there either by car, on foot or using the Mt. Lycabettus funicular railway which operates every day.