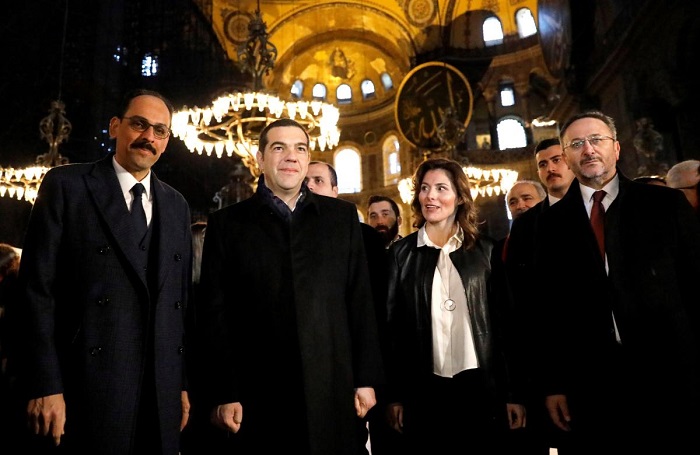 Greek Prime Minister Alexis Tsipras paid a symbolic visit on Wednesday to Istanbul’s iconic Hagia Sophia and the Orthodox Seminary of Halki during the second day of his visit to Turkey.
Tsipras refrained from making any statement to the assembled press while at Hagia Sophia, apart from stating that he was happy to be there. The ancient church, which was converted into a mosque before being made into a museum, is one of the most significant Byzantine structures in the history of the world.
The Greek premier listened enthusiastically as a guide accompanying the delegation explained the history of the edifice.
Hagia Sophia was first built as a cathedral in the sixth century during the years of the Christian Byzantine Empire as the centerpiece of its capital Constantinople, today’s city of Istanbul.
Almost immediately after the conquest of Constantinople by the Ottoman Turks in 1453, it was converted into a mosque. The iconic building became a secular museum in a key reform of the new post-Ottoman Turkish authorities under Mustafa Kemal Ataturk in the 1930s.


Later on Tuesday, Tsipras became the first Greek prime minister to formally visit the Halki Theological School since 1933, when Eleftherios Venizelos visited the school as a former prime minister.

He attended a religious service with Orthodox Patriarch Bartholomew and called for the school’s reopening, saying “it would be sign of friendship, mutual understanding and brotherhood.”
He said that protecting the rights of religious minorities is a self-evident obligation, “and not up to bilateral bargaining.”
“Religious faith should bring people together, not divide them,” the prime minister declared.
Perched atop a hill on the Marmara islet bearing the same name, the Halki Theological Seminary was operated by the Ecumenical Orthodox Patriarchate until 1971, when a Turkish court ordered the school shut down under a law curbing non-state religious education.

The European Union has in the past pressed Turkey to reopen the historic seminary, saying its closure undermines citizens’ freedom of religion. The EU has also tied the reopening to Ankara’s membership ambitions in the Union. Similar pressure to reopen the seminary has also come from the United States.
In comments made Tuesday, Erdogan linked the question of the reopening of the seminary to the ability of the Muslim minority of Thrace to appoint its own muftis.
Asked by a reporter about the Halki school, Erdogan stated, “Every time this comes up, I tell them we should resolve the issue of the muftis in Western Thrace. Let’s also solve this issue.”
Tsipras met Erdogan in Ankara earlier on Tuesday, where the Turkish president said he expected more cooperation from Athens in the repatriation of eight soldiers who fled to Greece following an attempted coup in 2016.
Tsipras explained in their joint news conference that Greece does not welcome insurgents as a rule, but that the case of the eight soldiers was a matter for the judiciary.
He said both countries had agreed to de-escalate tensions in the Aegean Sea and proceed with confidence-building measures. Differences with Turkey “can and must be solved with dialogue,” the Greek prime minister added.