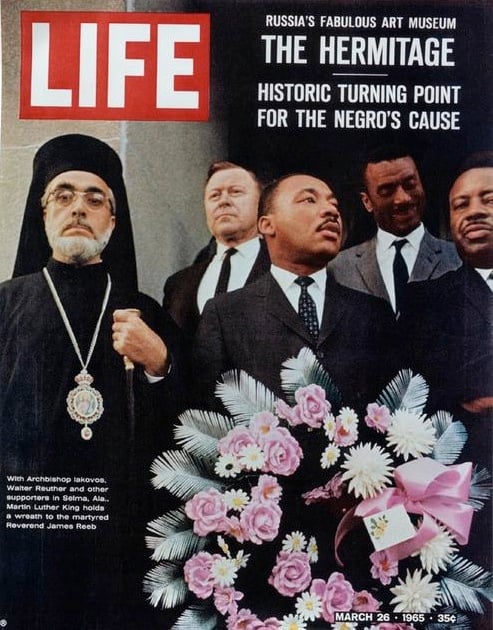 Archbishop Iakovos is known in the U.S. as the committed and caring pastor who put the Greek Orthodox Faith on the map for Americans and beyond.

He is also known as the first Greek archbishop in 350 years to officially confer with a pope. He left a legacy of a tremendous body of work accomplished as the primate of the Greek Orthodox Archdiocese in North and South America for 37 years.

However, Iakovos was also a great champion of civil and human rights who fearlessly gave his support to the Rev. Dr. Martin Luther King Jr. not only with his words, but also with his actions. He was one of the first powerful people to embrace the ideas of Dr. King, even daring to march hand-in-hand with him in Selma, Alabama in 1965.

“He had received threats if he would dare to walk with Dr. King, but he never thought twice of his decision,” says a close aide and friend of the Archbishop.

This historic moment for America was captured in a photograph on the cover of LIFE Magazine on March 26, 1965. (The entire magazine is now online and can be read here.)

The New York Times reported, “The striking cover of Time magazine that showed Dr. King side by side with the black-garbed Archbishop Iakovos marked a new presence of Greek-Americans and the Greek Orthodox church in American life.”

Iakovos vigorously supported the passage of the 1964 Civil Rights Act, exclaiming when the first bill was passed:

“GLORY TO THE MOST HIGH! MAY THIS MARK THE BEGINNING OF A NEW AGE FOR ALL HUMANKIND, AN ERA WHEN THE WORD OF GOD CHARTS AND GUIDES OUR LIVES.”

Known throughout the world as a dynamic participant in the contemporary ecumenical movement for Christian unity, Archbishop Iakovos served for nine years as president of the World Council of Churches. He established dialogues with Catholics, Anglicans, Lutherans, Southern Baptists and black church leaders. He was the first Orthodox prelate to initiate an Orthodox dialogue with Judaism.

In a successful effort to promote closer ties among Orthodox jurisdictions, he founded the Standing Conference of Canonical Orthodox Bishops in the Americas (SCOBA) in 1960. He was even the recipient of the Presidential Medal of Freedom, America’s highest civilian honor, bestowed on him by President Jimmy Carter on June 9, 1980.

Iakovos’ decision to support Dr. King, and the widespread publicity his action received, brought Greek-Americans and African-Americans much closer, resulting in a deep friendship which the two communities celebrate to this day.

"Someone called me a traitor, some said I am not an American, some I am not a Christian," watch this very relevant speech by Archbishop Iakovos explaining why he stood with Dr King in Selma, Ala. Full Story: http://usa.greekreporter.com/2017/01/16/archbishop-iakovos-why-i-supported-martin-luther-king-in-selma/

The enthronement of Archbishop Iakovos took place on April 1, 1959 at Holy Trinity Cathedral in New York City. He served as Archbishop of all the Americas until 1996, and passed away on April 10, 2005 at the age of 93.