By Nick Kampouris
January 20, 2019
Facebook
Twitter
WhatsApp
Linkedin
Email
Protesters clashed with riot police outside Greece’s Parliament on Sunday afternoon, following a rally in Syntagma Square against the Prespa Agreement.
Witnesses who uploaded videos and pictures on social media stated that members of the police force guarding the Greek Parliament made extensive use of tear gas to push back the demonstrators, who threw objects at them and tried to enter the Parliament.

There are no reports on who these demonstrators were. It is not known if they were among the crowd participating in the Macedonia Rally against the Prespa Agreement or if they were leftists or anarchists who were holding a counter-demonstration a few hundred meters away from Syntagma Square.

The Hotel ”Grande Bretagne” opened its doors to offer shelter to children and the elderly demonstrators who had respiratory problems due to the extensive tear gas used by the riot police.

Before these incidents, the rally against the Prespa Agreement was peaceful, with thousands of people attending, among which prominent members of the Greek opposition, such as the former Prime Minister, Antonis Samaras.
The demonstrators showed their opposition to the upcoming parliamentary vote on the deal that was reached between Greece and FYROM in July 2018 and demanded a referendum. 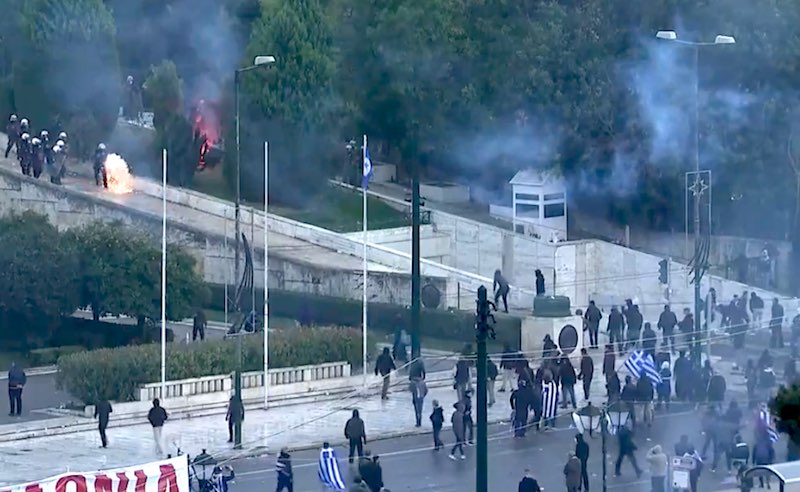