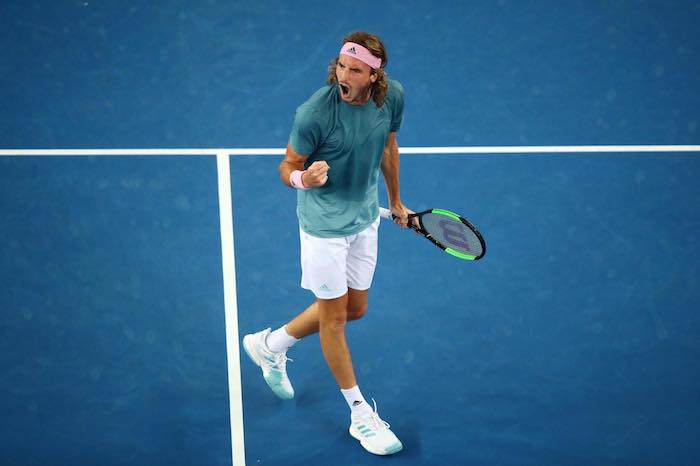 The 20-year-old Greek player became the first Greek person to make it to the quarter finals of any major tournament anywhere in the world.

Tsitsipas began the match showing that he would not surrender willingly to the Swiss tennis legend. Following a tense head-to-head fight, Tsitsipas lost the first set, with a score of 6- 7.

Federer seemed to begin losing a step during the second set, with the Greek player managing to win the tiebreak and level the match with a score of 7-6.

The third set was also won by Tsitsipas with an amazing performance and a score of 7-5, taking the lead into the final set.

During the fourth set, Federer tried valiantly to eke out a win, forcing the match to a fifth set. But Tsitsipas had other plans, booting the Swiss legend out of the tournament’s quarter finals after winning the set 7-6.

Tsitsipas declared just after the end of the match, ”I am the happiest man on Earth right now!”

.@StefTsitsipas has been idolising Roger Federer since the age of six.

The Greek player had his first post-match interview on the court, with legend John McEnroe. Referring to Federer, showing his great respect for the world-class player he beat today, Tsitsipas told McEnroe ”I’ve been idolizing him since the age of six.”

The twenty-year-old Tsitsipas was born in 1998 and he lives in Athens.

He was the first Greek individual to be named the “Most Improved Player” annually by the ATP World Tour Awards, snagging the honor in November of 2018.