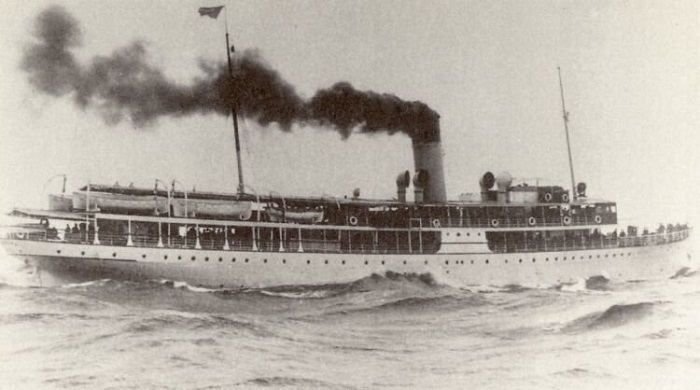 The sinking of the Greek passenger steamer “Himara” on January 19, 1947 near South Evia, with a loss of at least 383 people, has been written into history as the “Greek Titanic”.
Previously named “Hertha”, the vessel was handed over to Greece from Germany after WWII as a form of war reparations.
The Himara set sail at 8:30 in the morning of January 18, 1947 from Thessaloniki, with 544 passengers and 86 crew on board, headed for the Athenian port of Piraeus.
Because of the civil war which was raging in Greece at the time, traveling by sea was considered the safest option for the thousands who needed to visit the country’s two largest cities.
While sailing off south Evia Island in thick fog in the early hours of January 19, the ship suddenly struck a rocky islet between the Evian towns of Stira and Agia Marina.
The collision caused water to immediately begin to gush into the Himara’s hull, and the ship quickly became unable to make any headway.
Although the ship was only one nautical mile off Agia Marina and it took at least 90 minutes to sink, the freezing cold water and strong currents resulted in the deaths of 383 passengers and crew.


Among the victims were many women and children, as well as political prisoners and their police escorts.
According to other versions of the tragedy, the ship may have hit a mine placed there during wartime, or could even have been sunk by an explosion caused by saboteurs.
The captain, as well as the first mate who was on duty at the time, both survived the sinking of the ship. In the trial which followed, they were sentenced to only 15 and 20 months’ imprisonment for their part in the incident.