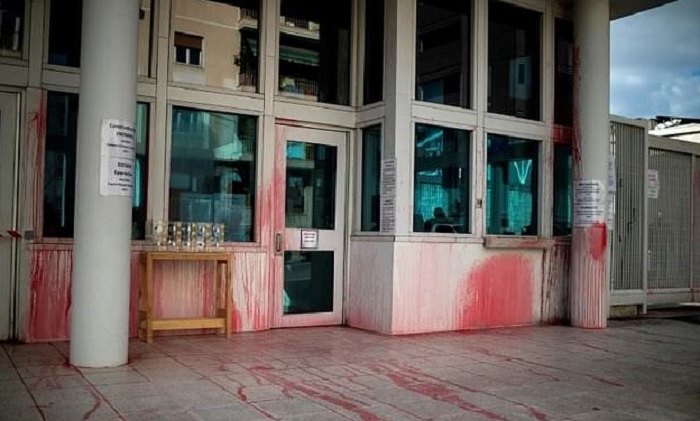 A group of anarchists belonging to the infamous Rouvikonas group threw bottles containing red paint at the U.S. Embassy in the center of Athens during the early hours of Monday.
According to the police, a group of around 10 people riding motorbikes approached the embassy from its side entrance and threw the bottles, before fleeing.
Two suspects were arrested and another eight were also detained but later released after the incident, which caused minor material damage but no injuries, police said.
Later, Rouvikonas claimed responsibility for the attack on an anti-establishment website.
The claim condemns “American imperialism”, and in particular to the role of the U.S. via the International Monetary Fund, and the situation in Syria.
The Greek foreign ministry condemned the action that it said undermined “longstanding friendly relations between the two peoples and the strategic relationship between Greece and the United States (which is) crucial for our country and the region.”
The U.S. Ambassador to Greece, Geoffrey Pyatt, condemned the attack, describing it as “silly and senseless vandalism.”

Kali Xronia! I’m happy to be back in Greece! During the current lapse in US govt appropriations, I’ll be less public in my daily work, but I do want to condemn this morning’s silly and senseless vandalism at the US Embassy and thank @hellenicpolice for their quick action.

Rouvikonas has carried out a number of similar acts on embassies, banks and public buildings in recent years, causing some material damage but no injuries.