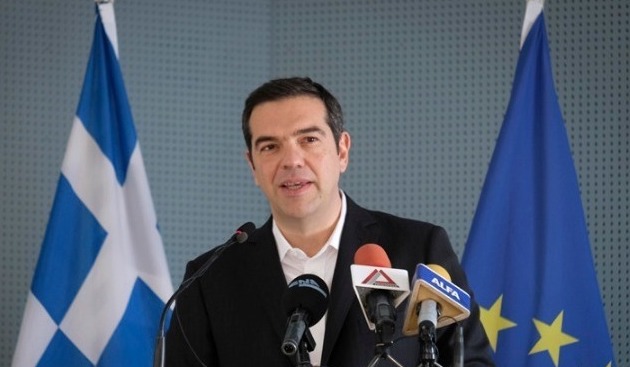 “2019 will be a landmark year for Greece,” Prime Minister Alexis Tsipras said on Sunday while visiting Samothraki island, where he attended Epiphany Day celebrations at the church of Panagia Kamariotissa and was made an honorary citizen.
Tsipras said that 2019 will be “the beginning of the great recovery” for a country that over a decade has been suffering the consequences of an unprecedented financial crisis.
He added that, within Greece, he wants to send the message that when it comes to issues that are beneficial to the nation’s interests the government will not fear any cost or risk.
Tsipras’ message for those outside Greece was that “despite our internal differences, the Greek nation will remain united to protect the sovereignty and the integrity of our country.”
Responding specifically to a statement made by Turkish President Recep Tayyip Erdogan on Saturday, Tsipras noted that “today, from Samothraki on the other side of the Aegean sea, addressing all the thinking men and women on both sides of the Aegean, I do not wish to quote verses of war.”
The premier added he would rather quote Bertolt Brecht, a poet who sang about the virtues of peace, social justice, and human emancipation: ‘Generally, man is very useful. He can fly and he can kill. But he has one defect: He can think.'”
Tsipras continued by saying that everyone who knows the history of the two nations knows that history has joined the Greeks and the Turks together “both in times of war and in times of peaceful coexistence.”
Greece, he added, is well aware of this history, and with the support of its always armed and ready armed forces, will always fight to defend peace, as well as the values of freedom and universal justice. Tsipras declared that this will be done “to the last drop of our blood, just as we will defend the very last corner of our country.”
The prime minister also stated that Greece is not a country which builds its national confidence based on words, but rather on actions and through its foreign policy. This, he continued, “is what has turned it into a pillar of stability in the Balkans and in the southeastern Mediterranean.”
Tsipras also stressed that Greece is gradually reclaiming its position of leadership in the region through dialogue and cooperation, and by fostering solidarity among the people and nations in the area.
(Source: AMNA)