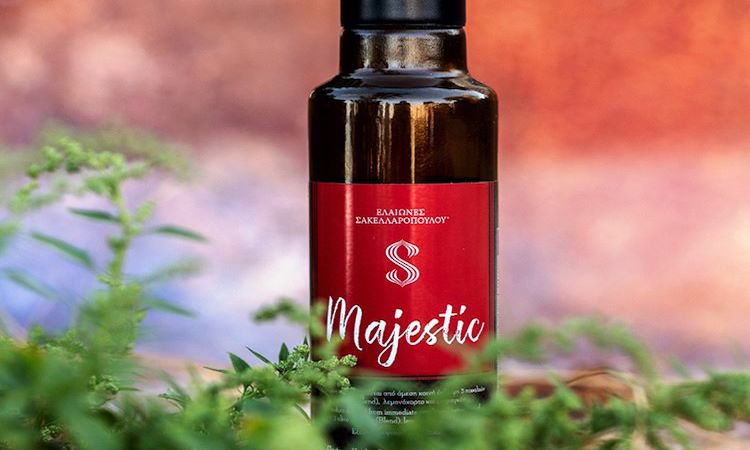 A Greek olive oil produced in Laconia ranked first among oils from 30 countries as the Best Condimento-Flavored Olive Oil for 2018. The prize was awarded at the annual World Ranking EVOO (EVOOWR) competition, which took place recently.
The EVOOWR is based on a system first introduced by the World Association of Writers and Journalists of Wine and Spirits, in which each extra virgin olive oil (EVOO) is awarded  points based on results from international competitions.
The “Majestic Flavored With Lemon Grass & Tarragon” virgin olive oil which won first place is produced by Sakellaropoulos Organic Farming, whose olive groves are near Mt. Parnon and Mt. Taygetos in Laconia, Peloponnese.
“This is a very important distinction, first for Greece itself, then for Greek olive oil and then for us,” co-owner and chemical engineer Nikos Sakellaropoulos told the Athens-Macedonian News Agency (AMNA). “Last year we were ranked second with our “Syllektikon” olive oil,” he noted proudly.
The top five rankings of the Best Condimento-Flavored Olive Oil for 2018 included the Laleli Flavored With Tea Leaves, from Turkey; Enzo Flavored Fresno Chili Crush, from the US; Delicious Truffle Flavored Olive Oil, from Crete in Greece; and the Lucero Flavored Mandarin Orange Agrumato, also from the USA.
For its rankings in specific categories, EVOOWR analyzed the results of 28 international competitions which included tastings of 9,522 samples from thirty different countries. Overall, Greece ranked third after Italy and Spain for the year of 2018, followed by the United States and Portugal.
EVOOWR’s purpose is “to communicate to the consumer the quality of the most-awarded extra virgin olive oils in the world”.
Source: Athens-Macedonian News Agency