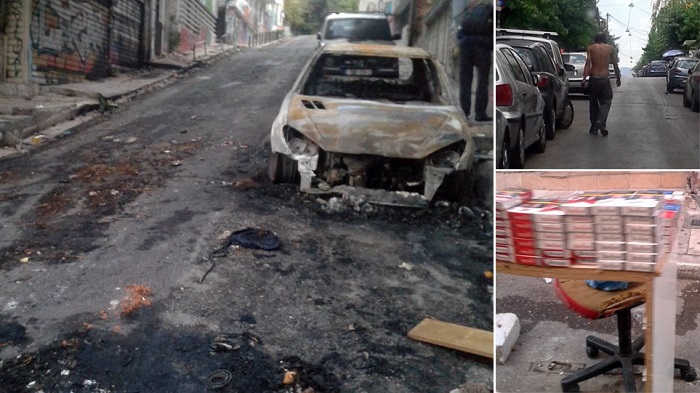 Residents of the infamous Athens district of Exarcheia published an angry open letter on Wednesday which describes the climate of lawlessness which prevails in their neighborhood.
The letter says that Exarcheia has become a “dark zone of Athens”, as radical leftist groups, anarchists and criminal gangs now dominate the area.
Police stations and other symbols of authority and capitalism, such as banks, are often targets of far-left groups in Exarcheia, which is situated near the historical building of the National Technical University in downtown Athens.
The residents claim that the district is in its “worst state ever”. They point to the recent violent clashes between hooded youth and police following the Polytechnic uprising commemoration on November 17 and the Alexis Grigoropoulos killing anniversary of December 6.
The letter highlights instances where troublemakers invade homes, burn cars and destroy public property, including traffic lights and rubbish bins.
It also claims that drugs are openly sold, even outside primary schools.
“The children of Exarcheia cannot play in their neighborhood. They are imprisoned in their houses, behind bars and railings that resemble high security prisons,” the letter notes.
The residents say that the state is “scandalously indifferent” to their plight, an attitude that is tantamount to “tolerating lawlessness.”

Iris, the Greek Goddess of the Rainbow