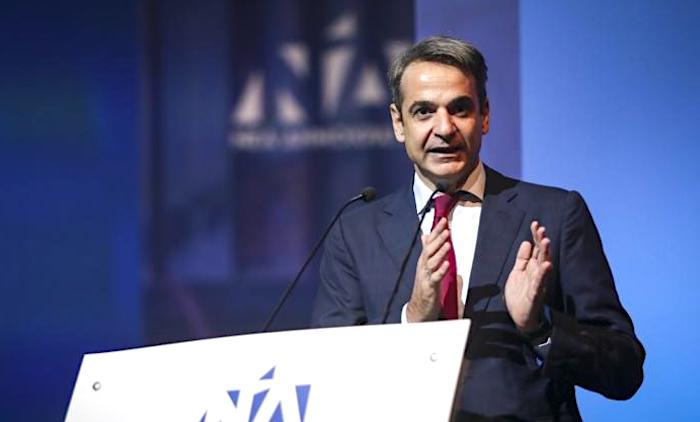 “New Democracy will not ratify the Prespa agreement, not now, not in the next parliament, not ever,” Kyriakos Mitsotakis said, addressing his party on Friday evening.
“Greece is at the most crucial turning point in its history,” said ND leader Kyriakos Mitsotakis, adding that “we deserve better, and all together we can take Greece forward. This is our message in three words: Greece, we can!”
The theme of the 12th Annual Congress of the main opposition center-right New Democracy party, which opened today in Athens, is ”Greece, We Can”.
The opening of the New Democracy Congress took place at the same time as the Greek Prime Minister’s major political speech in Thessaloniki, with analysts saying that the two speeches are the countdown to the next general election.
“The aim of our policy is not just development of the country, but to bridge previous failures, to break down the divisions, to reduce inequalities. Let’s work on the economic and social reconstruction of the middle class in our country” added the ND chairman.
Mitsotakis also announced a €2,000 grant to young families for every new child born in Greece. He said that the grant will be in every budget, including the very first one his party will submit.
The €2,000 subsidy is meant to cover all the necessary expenses incurred in the first part of a baby’s life and will be given, using broader income criteria, to the vast majority of new families.
In addition, Mitsotakis declared that, if ND comes to power, the minimum wage will rise in accordance with the growth rate in the economy. If there is 10 percent growth, the minimum wage will go up by 20 percent, until it reaches €703 per month.
Manfred Weber, the European People’s Party ”spitzenkandidat” (lead candidate) for the Presidency of the European Commission, also addressed the Congress of the ND Party during Friday’s session.
Margaritis Schinas, spokesperson for the current E.U. Commission President, Jean-Claude Juncker, also made remarks to the gathering, along with Dimitris Avramopoulos, the European Commissioner for Migration, Home Affairs and Citizenship.
With information from A.M.N.A.