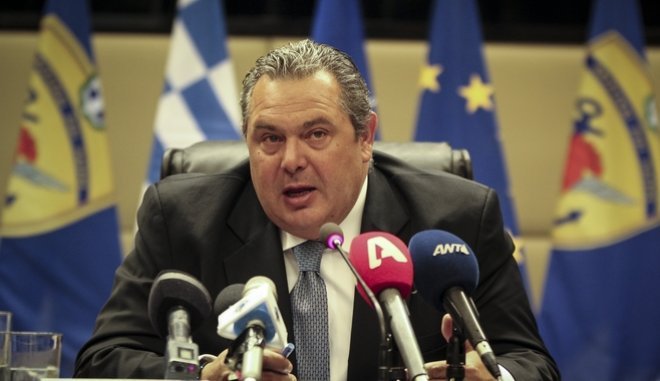 The Prespa agreement between Athens and Skopje is coming to an end after the latest statements by FYROM Prime Minister Zoran Zaev, said Greek Defense Minister Panos Kammenos on Friday.
Kammenos’ statement came after recent comments made by Former Yugoslav Republic of Macedonia Prime Minister Zoran Zaev, who allegedly said the “Macedonian” language can now be taught to “Macedonian minorities” living in Greece.
Kammenos, who is also the chief of junior coalition partner ANEL in the SYRIZA-ANEL administration, has openly opposed the name-change deal struck between Greek Prime Minister Alexis Tsipras and Zaev. After the irredentist comments by the FYROM PM, Kammenos stated that the Prespa deal cannot survive.
In the June agreement, the two sides stipulated that Greece’s Balkan neighbor will be called The Republic of North Macedonia, and Greece agreed that there is a Macedonian language and a Macedonian national identity.
“After the latest statements by Zaev, it is now obvious that all talk about the survival of the so-called Prespa agreement” has come to an end, Kammenos declared.
“The irredentism and provocative behavior on the part of Skopje proves to the international community that they are simply not ready to participate in international organizations,” he continued.
The defense minister also said that the FYRPM PM’s comments “justify all those who, from the very first moment, insisted that they are stuck on Mussolini and Tito propaganda.” Kammenos ended his remarks by pronouncing that the Prespa agreement is now virtually dead.