By Tasos Kokkinidis
December 4, 2018
Facebook
Twitter
WhatsApp
Linkedin
Email
Leaders PAOK extended their lead in the Greek Superleague to 6 points after second-placed Atromitos failed to win against lowly Apollon Smirnis on Saturday.
On Monday PAOK was a man down in the second half but still managed to beat Lamia 1-0 thanks to a Fernando Varela second-half strike.
Spanish midfielder Jose Canas received his marching orders after 62 minutes when he picked up a second booking.

The result has taken PAOK to 32 points, six more than Olympiacos, that downed Panetolikos 2-1 at the Georgios Karaiskakis Stadium to go one point above third-placed Atromitos.
The Piraeus team led 2-0 from the first 25 minutes courtesy of Daniel Podence and Miguel Angel Guerrero. Panetolikos was left with 10 men from the 53rd minute, but got to reduce the arrears on the 70th with Alhassan Kamara.
In other games:
Saturday
Ae Larissa Fc 4 – 2 Panionios
Apollon Smirnis 1 – 1 Atromitos
PAS Giannina 1 – 1 OFI
Sunday
Levadiakos 0 – 2 Asteras Tripolis
Aris Thessaloniki 1 – 1 Panathinaikos
AEK 2 – 0 Xanthi FC
Table 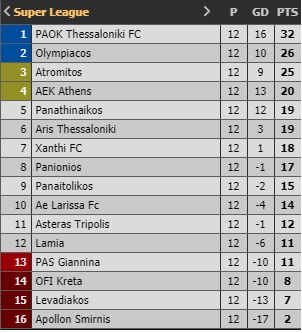