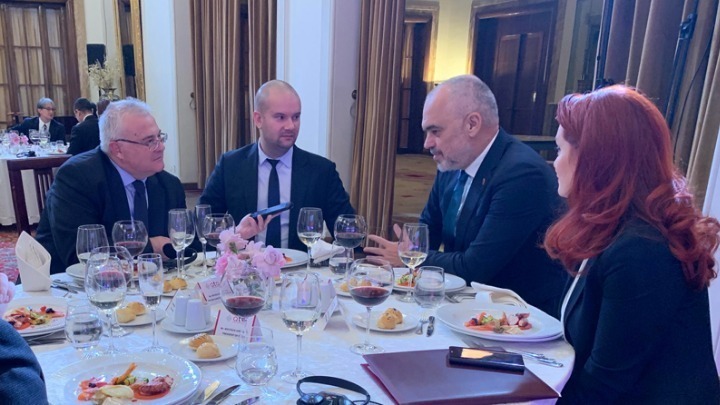 Albanian PM Edi Rama (third from left). Photo AMNA
Relations between Greece and Albania are “historical and traditional”, said Albanian Prime Minister Edi Rama on Sunday, according to the Athens-Macedonian News Agency (AMNA).
Rama spoke at a conference titled “News Agencies vs Fake News”, organized by the ATA news agency in Tirana, Albania.
The Albanian PM said that the two countries have a historical and traditional “neighborhood”-like relationship and, as is the case with neighbors, such relations are not always perfect. He even compared it with a football match, which may sometimes seem like a war.
However, he emphasized, both countries are willing to improve this relationship on a daily basis, which they are continually doing.
Rama further said that some unfortunate things may occur at times, and they need to be dealt with. He stressed, however, that relations between the two countries are good, adding that most important of all is the fact that there is no hostility between the two peoples.
The Greeks love Albania and Albanians love Greece, he said. All the rest is just politics, he explained.
Asked if he is planning to meet with Greek Prime Minister Alexis Tsipras, he replied that they will meet soon, either in Tirana or in Athens. The Albanian prime minister also said that a very comprehensive dialogue is underway, which he hopes will resolve many pending issues, stating that the talks are taking place with “courage and determination”.
“I think we are very close to resolving all these issues, and that would be great,” Rama noted.
Source: AMNA