By Tasos Kokkinidis
November 25, 2018
Facebook
Twitter
WhatsApp
Linkedin
Email
PAOK Thessaloniki continued its march towards the Greek Superleague title as they comfortably overcame high-flying Xanthi 2-0 at the Toumba stadium on Saturday.
Goals from Aleksandar Prijovic and Mauricio secured a 10th win in 11 games for Razvan Lucescu’s record-breaking team, who show no signs of letting up in their efforts to bring home the title for the first time since 1985.

Olympiacos is six points behind the leaders after scoring a last-minute goal against second-placed Atromitos away from home at Peristeri.
Atromitos took the lead through Efthymis Koulouris in the first half, but two second-half strikes by Mady Camara and Jagos Vukovic kept Olympiacos hopes alive to challenge PAOK for the title.

AEK last year’s champions suffered a humiliating defeat away from home to Panaitolikos. A first-half own goal from Uros Cosic and Alhassan Kamara’s 51st-minute strike sealed the three points for Traianos Dellas’ Panaitolikos side, with Andre Simoes’ late goal for AEK not enough to spark a comeback.

Panathinaikos picked up from where they let off after the international break on Saturday with another powerful performance to thrash lowly Apollon Smyrnis 5-1 at the Olympic Stadium.
A first-half double from Federico Macheda and goals from Dimitris Kourbelis, Emanuel Insua and Mattias Johansson after half-time sealed an easy win for the Giorgos Donis’ impressive young team, with Shikabala’s 67th- minute strike nothing but a consolation strike for the visitors. 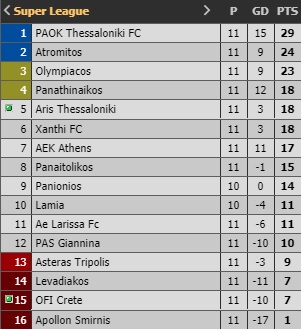