GRNews
GreekReporter.comGreeceLesvos Migrant Camp 'a Scar on the Conscience of Europe', Says Amnesty...

Lesvos Migrant Camp 'a Scar on the Conscience of Europe', Says Amnesty International 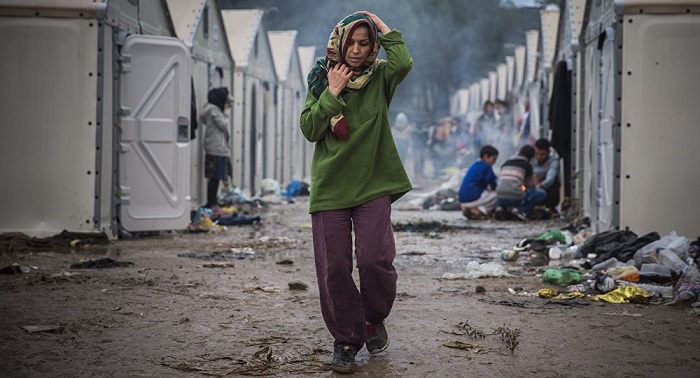 The secretary-general of Amnesty International, Kumi Naidoo, has sent an open letter to Prime Minister Alexis Tsipras, calling on him to take all necessary measures to improve living conditions at migrant reception centers on the Greek islands.
Naidoo, who visited Lesvos in early October, describes the situation at the migrant camp of Moria as “a scar on the conscience of Europe.”
“Moria is not the first refugee camp I have visited over the years but what I witnessed was quite simply shocking,” he says.
In his letter, he highlights the problems associated with overcrowding. “Thousands of people remain trapped there for months on end in squalid conditions. Their lives are in limbo, crushed by the prospect of being returned to a country that is not safe for them.”
“I witnessed firsthand how people, even pregnant women, and babies, have to sleep in cold, dirty and overcrowded tents,” Naidoo wrote, adding that the onset of winter is bound to aggravate conditions.
Earlier in November, the Greek government has promised to move thousands of migrants from migrant camps in the islands to the mainland to ease overcrowding.
“We plan to transfer 6,000 unprotected asylum-seekers and refugees to the mainland until the end of this year,” Dimitris Vitsas told reporters on November 16.
So far in 2018, he said, over 23,000 refugees have been transferred to the mainland due to overcrowding and poor living conditions in the island camps.