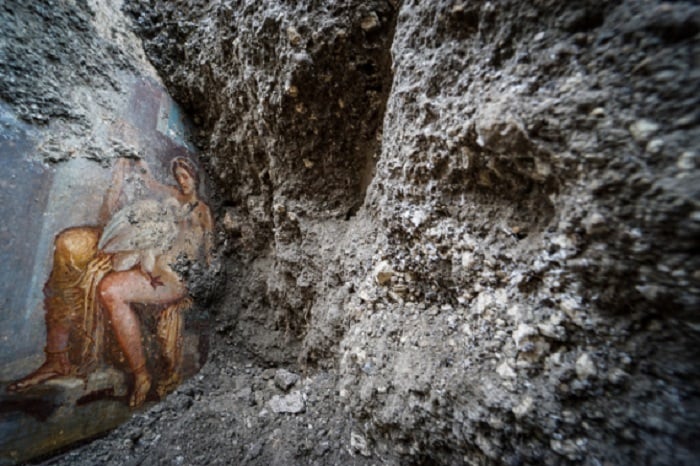 Archaeologists recently unearthed a fresco on the walls of a bedroom in the ruins of ancient Pompeii which depicts a sensual scene of the Roman god Jupiter, disguised as a swan, and Leda, the mythical queen of Sparta and wife of King Tyndareus.

The figure of Queen Leda being impregnated by the god in swan form was a fairly common home decoration theme in Pompeii and Herculaneum, another town destroyed in A.D. 79 by the volcanic eruption of Mount Vesuvius near present-day Naples.

But Pompeii Archaeological Park director Massimo Osanna praised this particular fresco as exceptional because it was painted to make it appear that Leda was looking back at the viewer of the fresco upon entering the bedroom.

According to Greek and Roman mythology, the twins Castor and Pollux (“the Dioscuri”) would be born as a result of Leda’s trysts, first with Jupiter and then Tyndareus. Not only these giants of Roman and Greek mythology, but the stunningly beautiful Helen — the future wife of King Menelaus of Sparta and the cause of the Trojan War — was also born of  Leda, as well as Clytemnestra, the bride (and assassin) of King Agamemnon of Argos and brother to Menelaus.

#Pompeii. The myth of Leda and the Swan depicted in a fresco, which was discovered during stabilisation and re-profiling works on the excavation fronts. More info: https://t.co/Q8THRo6jEI pic.twitter.com/W1nNSbySxx