Has a Missing Piece of the Ancient Antikythera Machine Been Found? 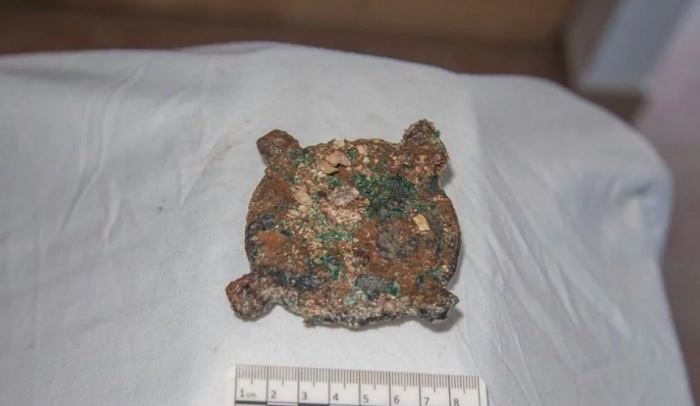 Archaeologists believe that they may have found the missing piece of the Antikythera Mechanism, the fantastically complicated, advanced analog “computer” unearthed in 1901 from a shipwreck offshore from the Greek island.
The encrusted, corroded bronze disk was pulled from the seabed in 2017. Further investigation on land has revealed it features four metal arms at each corner with holes for pins, and an x-ray revealed the engraving of Taurus the bull.


While it cannot be said conclusively whether it is a missing part of the Mechanism or not, based on evidence found so far, it is said to look exactly like other parts of the Machine, which had clearly been found incomplete. Based on the etching of the bull that can be seen with scanning, the new piece may well be a gear which predicted the position of the zodiac constellation of Taurus.

What is known so far is that the Antikythera Mechanism was built by the ancient Greeks to calculate different astronomical positions. It first disappeared 2,200 years ago after the ship carrying it sunk near the island of Antikythera.
It was first rediscovered in 1901 by sponge divers, who took their intriguing find back to land, where it was investigated by archaeologist Valerios Stais at the National Archaeological Museum in Athens.
Since then scientists have found that the computer can perform basic mathematical functions and can accurately track the movements of the sun, moon, planets and constellations, along with the timing of equinoxes and eclipses.
The site of the discovery has since been both explored and looted thoroughly. Among the finds have been statues made of bronze and marble, coins, a sarcophagus lid, and furniture.