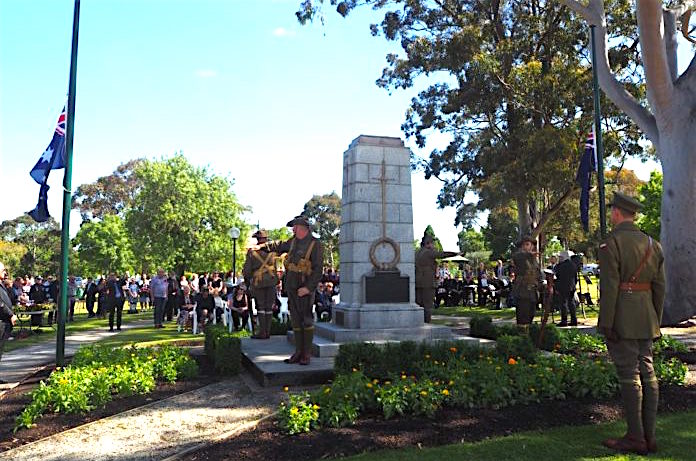 The Lemnos Gallipoli Commemorative Committee participated in a service by the Oakleigh-Carnegie RSL Sub-Branch on Sunday in commemoration of the 100th anniversary of Armistice Day in 1918.

The celebration featured the Oakleigh Band, a wreath laying and a Catafalque procession, with Members of Parliament, local government, schools, police, and community members taking part in marking the somber anniversary of the end of WWI.

Oakleigh-Carnegie RSL President Douglas Pendergast gave the keynote speech, noting that the Oakleigh District had one of the highest enlistment rates for WWI, with 10 percent  of its total population of 4,800 at the time joining the Australian Imperial Forces.

In his speech, he acknowledged the important role in the War played by the Greek island of Lemnos and the Australian nurses who served there. The service also recognized the role played by Lemnos’ Mudros Bay as the location of the signing of the Armistice between the Allies and the Ottoman Empire.

Lemnos had also been pivotal in the Gallipoli campaign in 1915, and in 1918 a great Allied fleet comprising ships of many nations – including Australia and Greece – sailed through the Dardanelles Straits to occupy the Ottoman capital of Constantinople.

The Oakleigh-Carnegie RSL has been a supporter of the work of the Lemnos Gallipoli Commemorative Committee for many years.