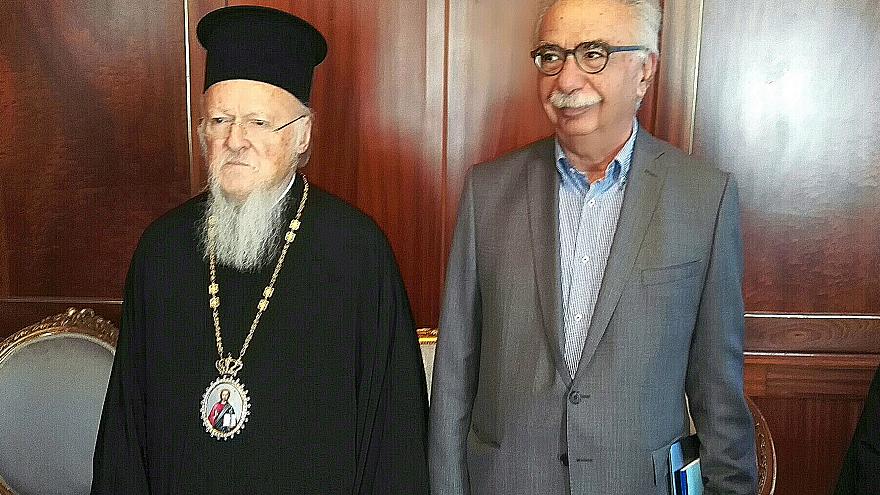 Ecumenical Patriarch Bartholomew and Education Minister Kostas Garvroglou
The Holy Synod of the Church of Crete on Saturday came out against the proposed deal concerning constitutional changes between Church and State, as discussed between Prime Minister Alexis Tsipras and Archbishop of Athens and all of Greece Ieronymos.
In a statement issued after the Holy Synod, the Church of Crete took a stand against several changes, finding the proposed amendments to article 21 “unacceptable” because that particular article protects the institution of the family, which is fundamental to the Greek state. “The family needs clear constitutional protection and not deconstruction,” it states. The Church also disagrees completely with the proposed change in article 3 which stipulates that “the Greek State should be religiously neutral” because the vast majority of Greeks are Orthodox Christians. The Holy Synod of Crete is also against the use of Church property by the State, as well as the proposal that priests’ salaries would be paid by State funds without the clergy being public servants, as they now are.
Education Minister to Fanari to brief Ecumenical Patriarch Bartholomew
Minister of Education, Research and Religious Affairs Kostas Gavroglou visited Fanari on Saturday to brief Ecumenical Patriarch Bartholomew on the proposed deal as discussed between Tsipras and Ieronymos.
After the meeting with Bartholomew, Gavroglu issued the following statement:
“I have listened to the concerns of the Ecumenical Patriarch. I will convey his concerns. In these cases, we always pursue the dialogue between all sides. As you know, we have an ideological and political commitment to solve certain issues and move forward.”