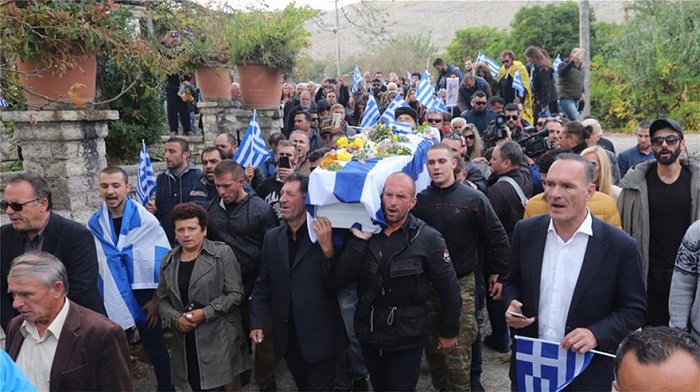 Hundreds of people bearing Greek flags crossed the border with Albania to join relatives for the funeral of Konstantinos Katsifas,, which took place in his home village of Bularat (Vouliarates) on Thursday.
The funeral for the ethnic Greek man who was shot dead by Albanian police last week was attended by his entire village, which is predominantly Greek. Church bells rang throughout the service. The crowd sang the Greek national anthem and shouted “immortal”.


Earlier, Greek authorities appealed to Greeks planning to attend the funeral to show restraint and respect toward his family.
Members of the ethnic Greek community in Albania are concerned that extremists will try to hijack the funeral to promote irredentist claims that could further strain relations between Athens and Tirana.
Attempting to ease tensions, Archbishop Anastasios of Albania called on both sides to tone down “irresponsible noise,” and show respect for the other side.
Last week, following a brief examination of the 35-year-old’s body, a Greek coroner ruled that Katsifas had not been shot at close range.
However, questions have been raised over the fact that gunshot wounds to his chest had been sewn up before the Greek coroner was allowed to see the body.