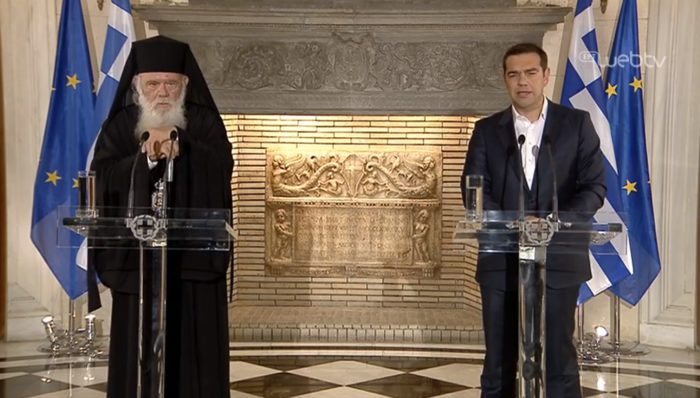 The deal reached between Greek Prime Minister Alexis Tsipras and Archbishop of Athens and all of Greece Ieronymos on Tuesday has little substance and raises suspicions that it is more of a ploy than a substantial change in the Greek Church-State relationship.
The separation of Church and State has always been the desire of Greek leftists, as they see the Greek Orthodox Church being associated with conservatism and even a direct relationship with nationalism. After all, the motto of the seven-year-long colonels’ junta was “Homeland-Church-Family”. Three institutions that are not on the top of favorites of Greek leftists.
As soon as Tsipras announced his proposed constitutional revisions that include the separation of Church and State — suspiciously at a time when his foreign minister resigned amidst allegations of using secret ministry funds to complete the FYROM name change agreement — the Church and opposition reacted. Public interest shifted to Tsipras’ proposals and the FYROM name issue has been left out of the front pages. More importantly, the resignation of foreign minister Kotzias and Tsipras’ refusal to make public the content of the letter the former sent him is also forgotten.
Tsipras called the verbal agreement with Ieronymos as being of “historic proportions” — he said the same about the FYROM name deal  — yet the general public does not seem to be convinced of that, much less the Greek clergy.
The main point of the proposed agreement between the State leader and the Church leader is that priests will no longer be considered public servants. Instead, the Greek State will allocate an annual amount equivalent to the wages of the priests of the Church of Greece. The Church of Greece will then be responsible for the distribution of wages to the priests.
Tsipras added that a new fund will be established jointly by the Church and the Greek State to make use of Church property, without providing any details. It should be noted that the number of Church properties is enormous.
In essence, instead of the State paying clergy their wages directly, the State funds will be given to the Church and the Church will be paying the priests. This looks like a half-way separation between Church and State, if that. The only difference would be that clergy will no longer be considered public servants.
The clerics’ union reacted immediately, on Tuesday evening announcing that they oppose the agreement and that “the reaction is going to be massive and unprecedented in Greece’s history.”
Ieronymos appeared to back-pedal as well, stating on Wednesday that there is a difference between an agreement and the intention to reach an agreement.
The move to separate church and state by Tsipras is looking suspiciously like an effort to solidify the hard leftists in his party and his electorate. Some of his MPs are disappointed that he sided with Defense Minister Panos Kammnos. In addition, immediately after the announcement of the verbal agreement between the prime minister and the archbishop, government spokesman Dimitris Tzanakopoulos rushed to announce that the 10,000 positions in the public sector that will be open after the removal of clergy from the State payroll will be filled by doctors, teachers and so on.
If that doesn’t smell like pre-election time, nothing does.