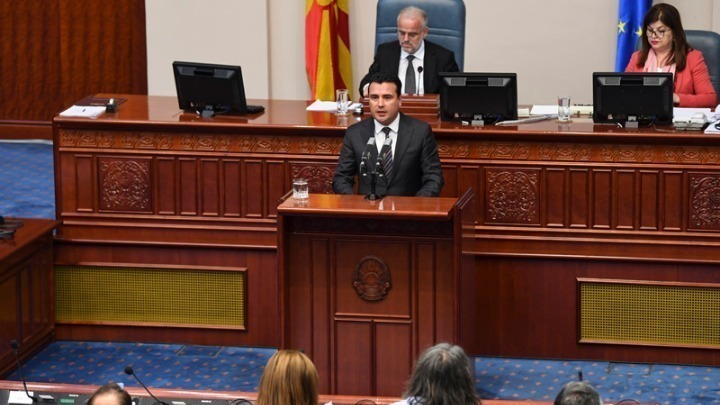 FYROM’s government has submitted draft constitutional amendments to parliament that would formally rename the country “North Macedonia.”
Prime Minister Zoran Zaev said on Friday the debate on the proposed changes under a deal with neighboring Greece is expected to take a month.
He said that all references to “Macedonia” will be replaced by ‘North Macedonia”, with one exception.
This is Article 36 of the new constitution which refers to the nation’s struggles against the Axis powers in the Second World War and reads:
“The Republic guarantees social security rights to veterans of the anti-fascist war and to all the Macedonian national liberation wars, to all those evicted and imprisoned for the ideas of the distinct identity of the Macedonian people and Macedonian statehood.”
Тhe first draft amendment envisages the addition of the adjective ‘North’ to the name of the country, as stipulated in the ‘name’ agreement.
The second draft amendment envisages changes in the constitution’s introductory statement that would reaffirm the foundations of FYROM’s statehood in more detail and remove any Greek concerns about possible irredentism, Zaev explained.
The third draft stipulates that the country respects the territorial integrity, sovereignty and political independence of its neighbors.
The final draft amendment concerns articles in the constitution that cover what the country does for its diaspora.
If the preliminary agreement is fully implemented, Athens will lift its objections to FYROM joining NATO and starting talks on joining the EU.
If the lawmakers approve all the proposed constitutional changes, Greece’s parliament will begin to ratify the agreement.