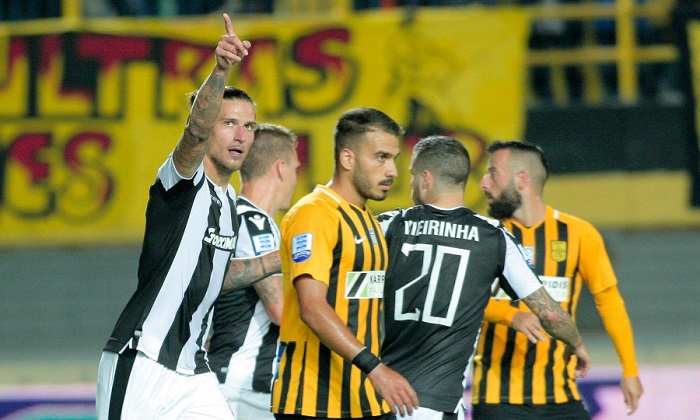 PAOK fought back from a goal down to clinch a 2-1 win over Aris in a pulsating Thessaloniki derby showdown on Sunday, maintaining their 100 percent record in the SuperLeague with a seventh straight win.
Serbian striker Aleksandar Prijovic was the goalscoring hero for Razvan Lucescu’s impressive team, scoring twice to cancel out Mateo Garcia’s early opener for the home side to turn the match on its head.

Olympiacos suffered a 1-0 loss at OFI on Sunday night, collecting just one point in the last three games. Dijilly Vouho scored for OFI’s first win since its return to the top flight.
AEK overcame the three-point deduction, for its fans’ action at the derby against Olympiacos, beating bottom team Apollon 2-0 away on Saturday, goals coming from Petros Mantalos and Marko Livaja.
Joining AEK and Olympiacos, at six points off the pace, is Panathinaikos, that notched up in sixth win in seven matches downing visiting Panionios 1-0.
In other games over the weekend:
PAS Giannina-Panetolikos 0-2
AE Larissa – Lamia 1-2
Levadiakos – Xanthi 1-2
Atromitos – Asteras Tripolis – Monday 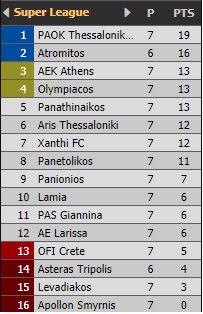