Nikos Kotzias: The Architect of the Prespa Agreement Pushed Out from Tsipras' Ship 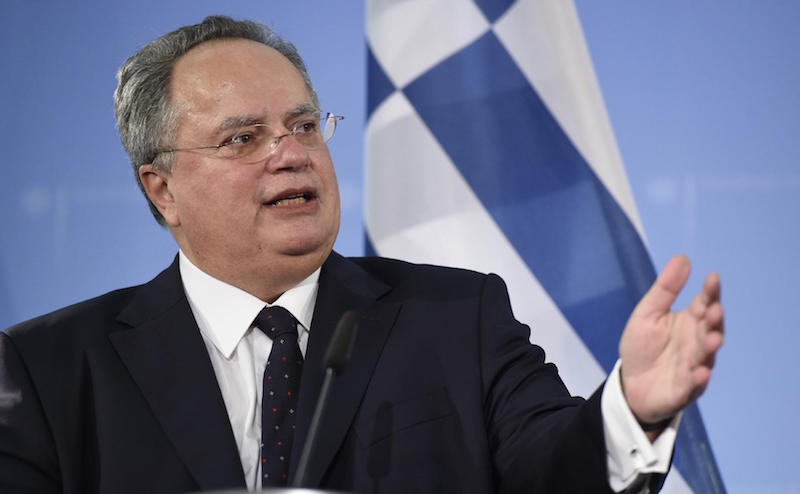 The resignation of Greek Foreign Minister Nikos Kotzias on Wednesday was so sudden and unexpected that Prime Minister Alexis Tsipras did not have a replacement in mind, so he decided to take the difficult foreign policy portfolio himself.
The cabinet meeting on Tuesday showed a government on the verge of a nervous breakdown. Everyone was expecting that all eyes would be on Defense Minister Panos Kammenos who returned from the United States after acting as a combination of defense and foreign policy minister, proposing policies and projects of his own that had nothing to do with the prime minister or the rest of the government.
Kammenos proposed the establishment of three new U.S. military bases in Greece and an alternative plan for the accession of Former Yugoslav Republic of Macedonia to NATO without a name change. His argument for the latter was that the name agreement between Greece and FYROM would not pass in the Balkan country’s parliament and very likely the Greek House would not ratify it either because his junior coalition party (ANEL) is against it.
The defense minister’s statements in the U.S. had SYRIZA ministers and MPs fuming. Several ministers criticized Kammenos and, indirectly, asked Tsipras to oust him from the post.
During Tuesday’s cabinet meeting Kotzias attacked Kammenos directly, accusing him of promoting his own political agenda, acting as a foreign minister and damaging the government. At the same time, his statements sabotage the national position on the Prespa agreement, he said.
According to sources within the government, Kotzias resigned because Tsipras did not back him in the row with the defense minister. The foreign minister believes that his hard work along with the prime minister’s support achieved the Prespa agreement, of which he considers to be one of his diplomatic triumphs.
Kotzias was very disappointed that his prime minister decided to take the side of the volatile defense minister and not his. The fact that Kammenos often threatened to topple the government by taking his MPs and leaving caused the coalition and Tsipras to fear that he might actually do so; this in turn led the prime minister to “sacrifice” his foreign minister in order to keep the ANEL leader at his post.
The minister has been very proud of his “multifaceted” foreign policy and especially for the Prespa agreement, claiming he resolved a 27-year-old problem. He rejected criticisms that he gave the Skopje government the right to speak of a “Macedonian language” and “Macedonian ethnicity” that drove at least 60 percent of Greeks to stand against him. His argument that he added the “North” to plain “Macedonia” — thereby being the victor — failed to appease Greek patriots who did not want Skopje to use the word Macedonia at all.
In his negotiations with his FYROM counterpart, Kotzias kept a Skopje-friendly stance. At some point he infuriated Macedonian Greeks saying that the name and origin of Alexander the Great is “contestable”, while he often stated that FYROM citizens have the right to call themselves what they want.
Nikos Kotzias belongs to the left of the left-wing SYRIZA. A devout Marxist, he has been a member of the Communist Party of Greece (KKE) starting from the youth of the party. He had a diplomatic career from 1993 until 2008 and was also Professor of Political Theories and International and European Studies at the University of Piraeus.
The Greek diplomat was an admirer of the German Democratic Republic (East Germany) regime and its communist leader Erich Honecker. It is rumored that he was nicknamed “Honecker” during his political and diplomatic career. In fact he was one of the authors of Der autonome Intellekt, a 1976 book co-written by members of Honecker’s Socialist Unity Party. However, Kotzias later refused that the book exists.
Kotzias played an important role during the “spring” of the Greek-Turkish relations in 1999, implementing “earthquake diplomacy” at the time when the two countries were struck by destructive earthquakes. He was in favor of the Greek-Turkish rapprochement as a new policy doctrine and introduced the confidence building measures.
In September 2012, Kotzias founded the political movement named Pratto (πράττω, meaning “act, do”), the purpose of which is “to form a radical, patriotic, democratic and social movement, advocating the interests of the country, the Greek people, the workers and the Greek natural environment.”
After his resignation, Kotzias made the following enigmatic statement: “The time comes, ‘the poet says’ when you decide with who you go with and who you leave. The Prime Minister and a number of ministers made their choices yesterday at the cabinet and I myself made mine. It is good to remember, however, the verse: ‘they wanted to bury me deep, but they forgot that I am a seed’.”