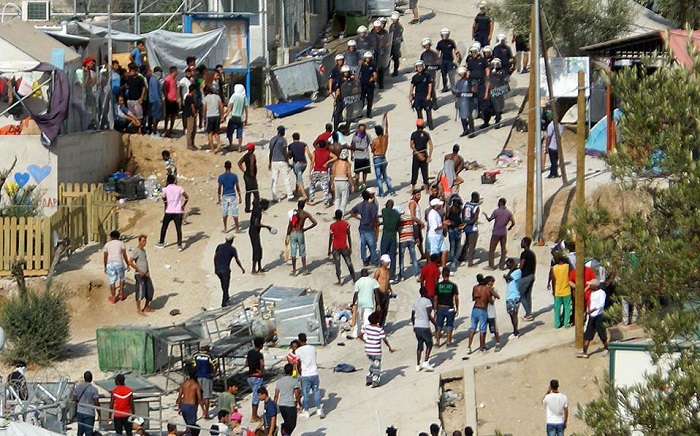 A television report by Deutsche Welle, claims that criminal gangs of Syrians that are sympathetic to the Islamic State (ISIS), have established a regime of terror in the Moria migrant camp, on the Greek island of Lesvos.
The report, which is partly shot in secret, shows pro-ISIS slogans on the walls of the overcrowded camp, which is considered the worst in Europe.
The only thing that seems to work is crime, says the report.
Underneath the nose of the Greek authorities, gangs from Syria control drug smuggling and prostitution. Members of the gangs do not hesitate to use overt violence, using knives, and relying on Sharia law, the report says.
Although it cannot be confirmed that the gangs are directly related to the Islamic State, its symbols are visible on doors and walls.
German security officers confirmed that members of the Islamic State live in Moria, along with 8,000 asylum seekers, according to the report.
They have also expressed concerns that some may have moved to Athens in their way towards western Europe.
The Deutsche Welle report describes a climate of violence and crime at the camp, which the Greek authorities either are not aware of or choose to ignore.