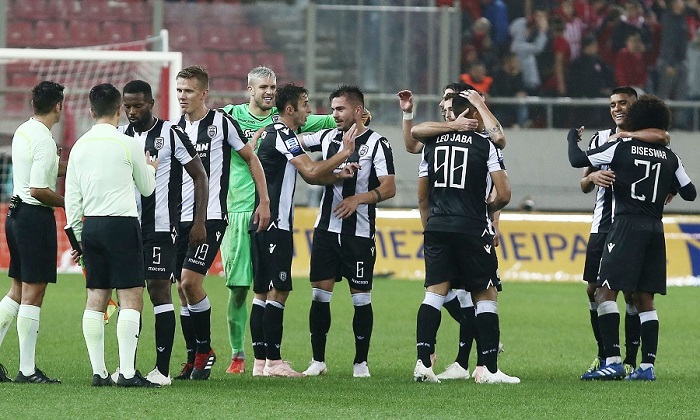 A freak own goal by Olympiacos handed PAOK a 1-0 victory over their rivals at Giorgos Karaiskakis stadium on a wet Sunday night at Piraeus.
Four minutes into the second half PAOK’s Vierinha was left with time and space to cross from the left, and when Olympiacos goalkeeper Andreas Gianniotis failed to deal with it, defender Jagos Vukovic turned the ball into his own net as he attempted to clear.
PAOK’s win means that Razvan Lucescu’s team top the table with 13 points after recording five straight wins (having began the season with -2 points), while Olympiacos remain in fourth spot, level on 12 points with AEK and Atromitos ahead of them.


Atromitos produced another convincing display on Sunday beating host Levadiakos 2-0, and is also on 13 points.
AEK and Aris follow with 12 points. AEK triumphed over 10-man OFI at Iraklio with a 3-0 score, goals coming from Tasos Bakasetas, Rodrigo Galo and Ezequiel Ponce, while Aris left it late to beat Asteras Tripolis 2-0 at home courtesy of goals by Hamza Younes (from the spot) and Mateo Garcia.
Panathinaikos is the only other team to have a perfect record, but its six-point penalty at the start of the season means it sits sixth on the table with nine points. On Saturday it came from behind to beat visiting PAS Giannina 2-1 amid stormy conditions at the Olympic Stadium.
In other weekend games Larissa downed Panetolikos 1-0 and Panionios scored its first victory of the season beating bottom team Apollon 2-0 away.
On Monday Lamia hosts Xanthi.
Standings after 5 games: 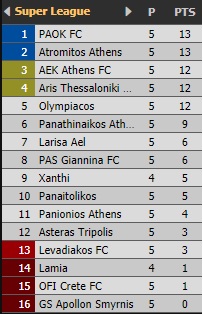