GRNews
GreekReporter.comGreeceDistrict of North Aegean Threatens to Close Down Refugee Camp in Greece's...

By Nick Kampouris
September 10, 2018
Facebook
Twitter
WhatsApp
Linkedin
Email
The District of North Aegean published a press release stating that the Greek government has a deadline of 30 days to fix the numerous issues that Moria Refugee Camp faces on the island of Lesvos.
If the Greek authorities fail to meet the demands of the district, the camp will have to be shut down, according to the release. 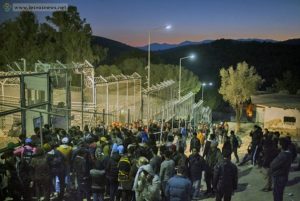 Experts in the District of North Aegean who conducted a thorough check to the infrastructure of the camp, found a series of leakages that pose health risks for immigrants, staff members, and locals.
Additionally, the number of refugees that the camp hosts exceeds its maximum capacity, thus increasing the chances of diseases spreading.