Newly Restored Rotunda is One of Thessaloniki's Oldest Religious Sites 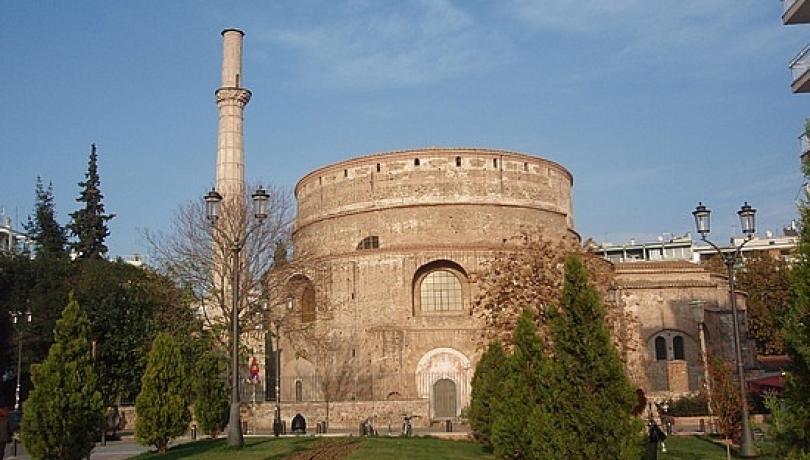 Severely damaged by the 1978 Thessaloniki earthquake, the newly restored Rotunda is one of the city’s oldest religious sites and a tourist landmark, a UNESCO World Heritage Site.
Given back to the public in 2017 after almost 40 years of restoration work — and works continuing still — Rotunda owes its name to its circular shape. Built in 306 AD by Caesar Galerius, Rotunda is situated 125 meters northeast of the Arch of Galerius on the upper side of busy Egnatia Street.
It was constructed as part of the complex of the Galerius Palace along with his Arch (Kamara). The Galerian Complex is the most well-preserved monument of its era in Europe and includes a linear axis which connects the Rotunda with the Arch and with the sea. 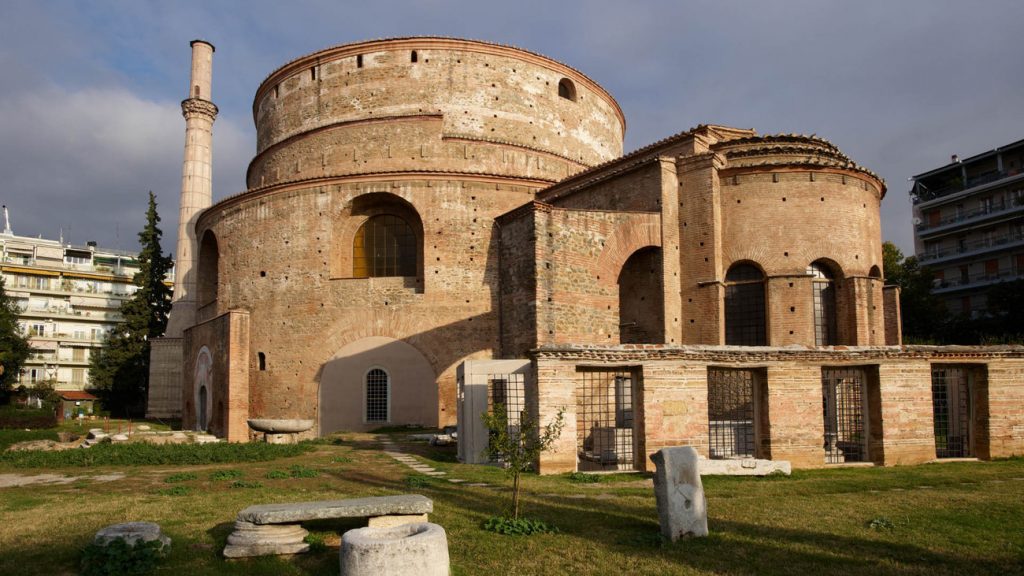 It was intended to be Galerius’ mausoleum although it was never used for this purpose. It was likely dedicated to Zeus or Kaviros and it served as the Metropolitan Church of Thessaloniki from 1523-1590. In 1998 it was enlisted as a World Heritage Site of UNESCO.
The building, with a diameter of 24.50m, covers an isosceles dome made of bricks, reaching a height of 29.80m. The 6.30m cylindrical wall is split internally into eight rectangular niches, of which the south was the main entrance.
Its conversion into a Christian temple, most probably dedicated to the Assomats or Archangels, occurred during the Early Christian years. During the same period, the eastern niche was opened and the holy step was constructed, a rectangular space with a semicircular arch in the east. 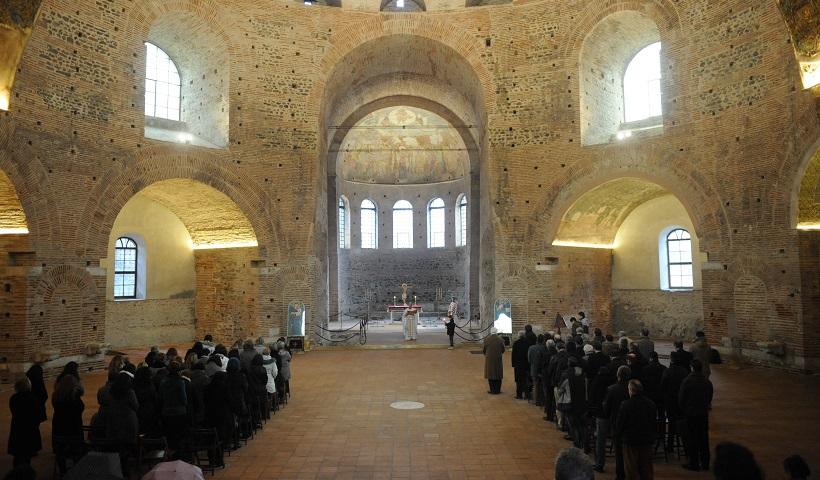 A closed sheltered arcade (8m wide) was added around the building, communicating with the central space through seven holes that were opened in the original core. A new narthex entrance was formed in the western conch, and a propylon with two chapels, a circular east, and an octagonal west were added. None of the above additions, except for the configuration of the eastern niche, are preserved today.
The brightest remnants of the Early Christian phase of the monument are the excellent mosaics. The windows and the vestibules of the vaults at the base of the dome are decorated with mosaics whose wealth of themes with plant and geometric motifs and the splendor of colors impress the visitor.
In the dome, the large compositions were developed in three successive zones. The lower one, known in the bibliography as a martyrs zone, is divided into eight divisions, depicting martyrs in front of monumental architectures. 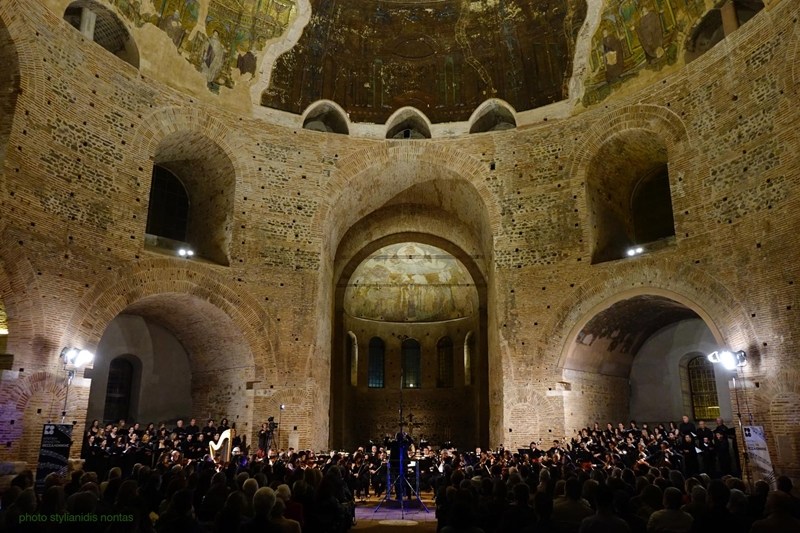 In the eastern partition that was destroyed when the dome section collapsed, the damaged sections of the mosaic were completed with a wall painting by the Italian painter S. Rossi in 1889. The middle zone of the mosaics of the dome is almost destroyed. Only the lower part is preserved, where legs of the male figures in movement, probably angels, can be seen on the ground.
From the mosaic representations of the third zone, the heads of three of the four angels that hold wreaths with many stars, a plume of branches and twigs and a multicolored iris are saved. Among the angels, the mythical phoenix is depicted on a red radiant disc. In the center, there is a depiction of Christ in a triumphant gesture.
In terms of architecture, the Rotunda is considered to be the twin monument of the Roman Pantheon due to their similar Greek–style design and the resemblance of their oculus. Its thick walls provide great resistance in times of earthquakes, such as the one that occurred in 1978. 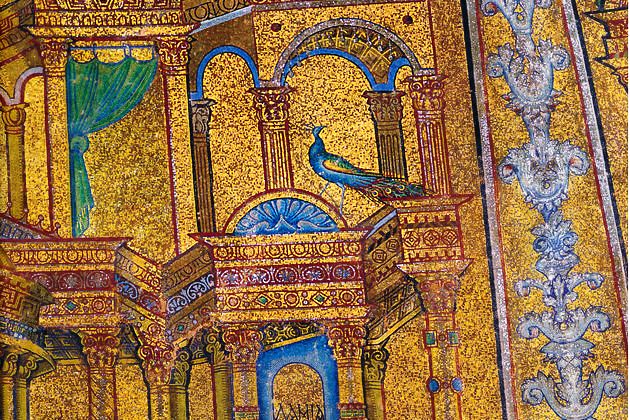 In the 4th century AD the Byzantine Emperor Constantine I converted it into a church, with a symbol of Orthodox Christians, dedicated to the Archangels who are pictured in the mosaics of its walls along with other Early Byzantine masterpieces of early Cristian art that date back to the period between the 4th and 6th century AD.
In the 14th century the Ottomans conquered Thessaloniki and in the late 16th Century the Rotunda became a mosque. A minaret was then added in the building and it still remains, reminding all of the intercultural identity of this imposing structure.
In 1912, after the liberation of the city from the Turks, the mosque was converted into a church in honor of Saint George, probably because of the little church with the same name situated very close to it. However, the name Rotunda was the one which prevailed due to the shape of its hemispherical dome.
Outside the temple, there are Jewish tombs and one can see Byzantine remains. to be seen. About twelve times a year the Rotunda is open for religious purposes, including the celebration of Saint George, as well as for live events such as concerts of classical music.