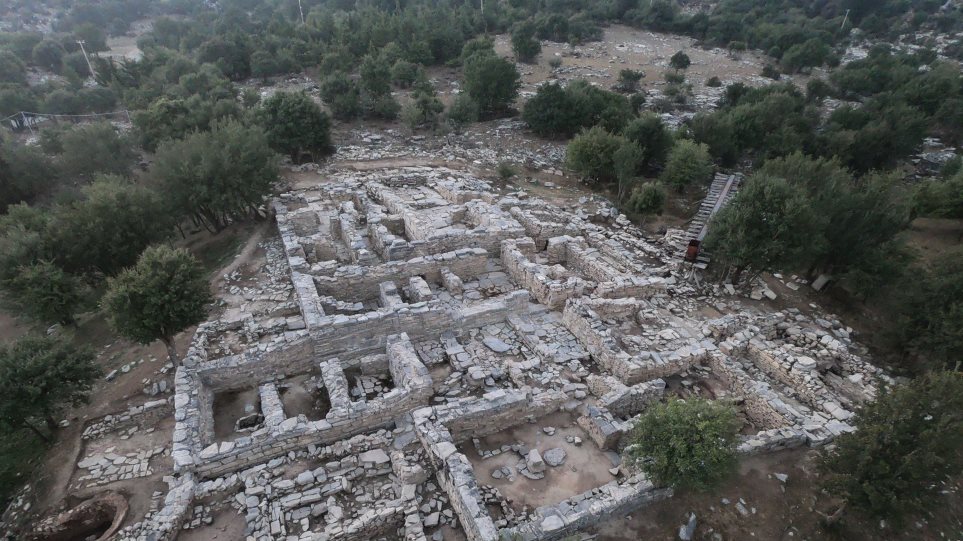 This year’s excavations in the Minoan Palace of Zorinthos in Crete revealed important information on the Paleopalatial period (1900-1700 BC).
The findings of the excavation headed by the Honorary Director of Antiquities Dr. Efi Sapouna-Sakellaraki indicate that the complex was a combination of natural rock on which the building complex was founded, and had been operating as an open-air worship site since 2000 BC .
In ancient times, worshippers would place offerings in the rock cavities, such as vases or egg cups, many of which were painted red or black. 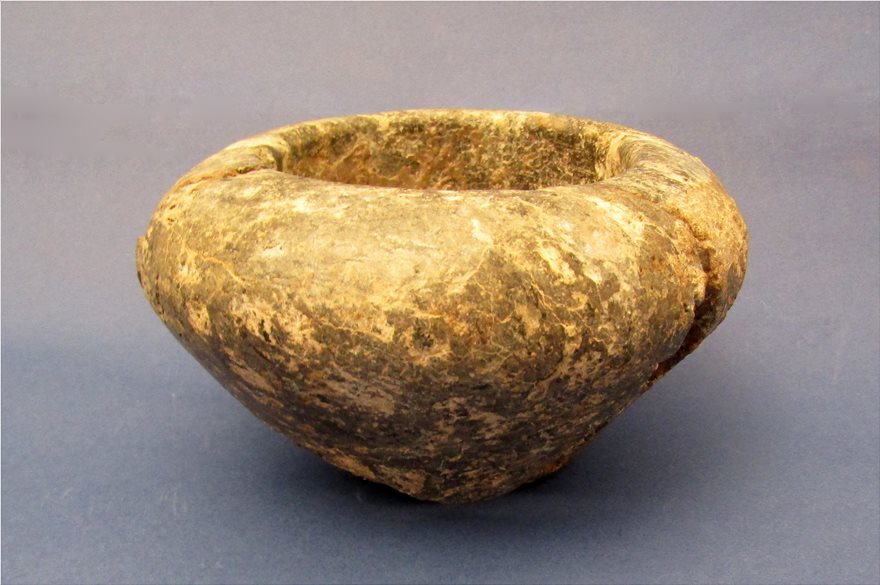 The building complex was built on the rock as the ruins demonstrate today. In the southwestern part, the final form of the structure was revealed in this year’s excavation, with two-storey or three-storey buildings made with stone or wooden floors on the rock.
Among the new movable findings are valuable objects and utensils such as bronze textbooks, stamps, stone pots, etc. In the same place, a fragment of a chalice and a bronze teaspoon dated before 1750 BC were found.
According to archaeologists, this was the first time a combination of rock with a multi-storey building is found in a residential center. A stone relief on a vase from the Knossos area shows a worshipper kneeling to dedicate an object to an altar between rocks, and over a rocky landscape a building is shown. 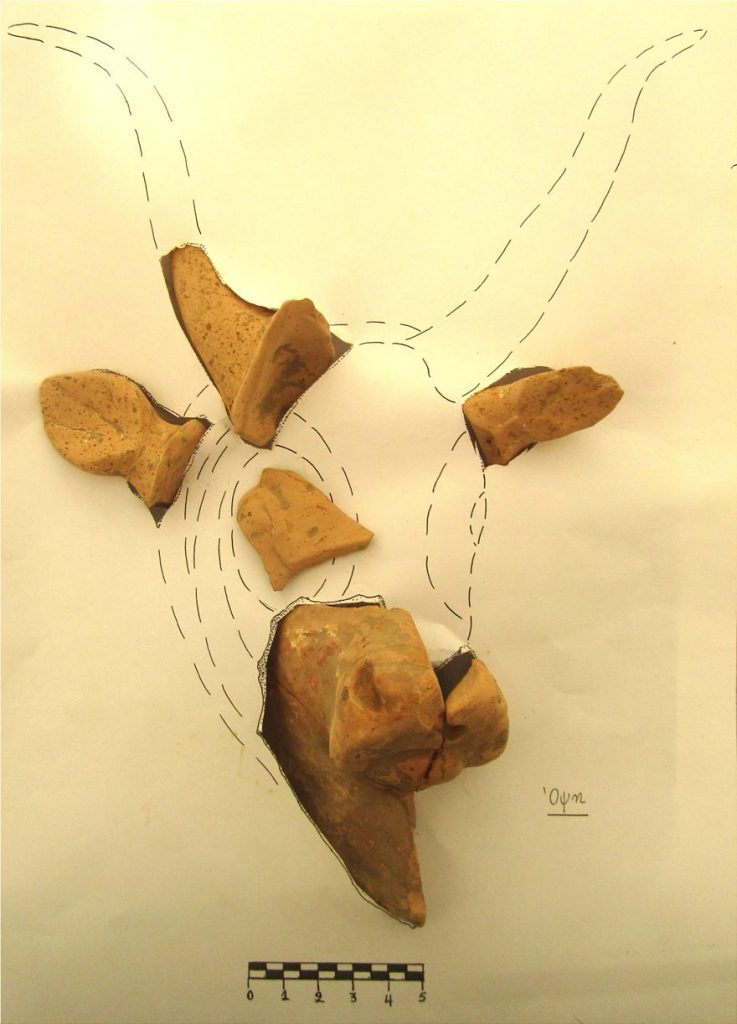 The above findings confirm that this was a place of worship in which, as archaeologists believe, ceremonial dinners were taking place, as evidenced by the number of bowls, conical cups and trimmers that would probably be used to prepare food.
This year’s excavation widened the total excavated area by 100 square meters, revealing more architectural details. A northwest entrance with a two-sided doorway leads to a paved area built on a shaped part of the rock.
In the Minoan years, such an area is believed to have been used as an outdoor venue for sports or ceremonies. In the Roman era, the same part was used as a paved courtyard of the building that had been built by the Romans over the ruins of the Minoan building.
A coin of Emperor Hadrian, which was found in this spot, along with another coin, of Marcus Aurelius, which was found in 2017, confirms the Roman presence. 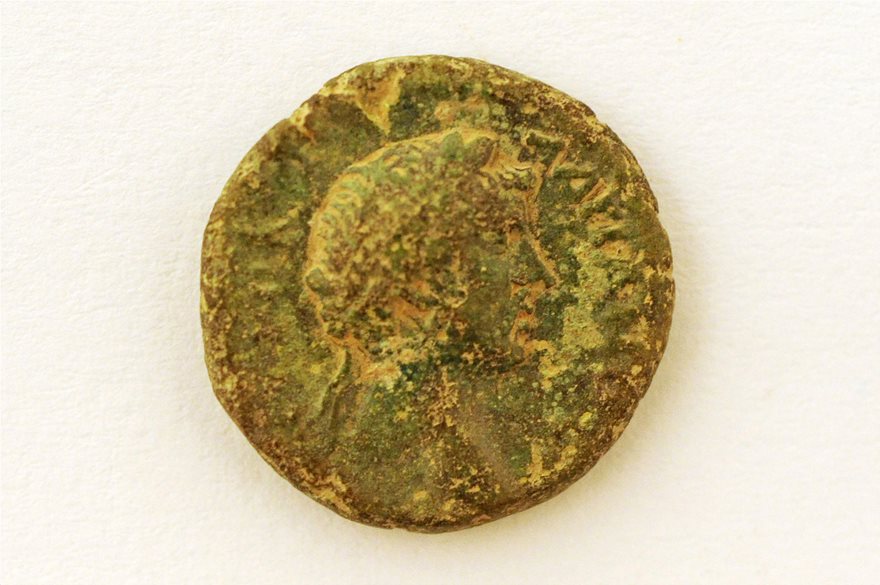 Another impressive paved entrance with built with a multi-window leading to an anteroom with a desk was revealed on the northeast side of the building.
A special finding is a part of a large rhyton (ceremonial vase) in the shape of a bullhead that measures 30 centimeters high, which was located in one of the rooms on the west side of the building.
According to the researchers, despite a long history of different settlers from the Minoan era to the Venetian era, and despite the numerous modifications and looting, the palace of Zorinthos preserves many elements that prove its great archaeological importance.
Moreover, it is the only Minoan religious, economic and production center at an altitude of 1200 m which is perfectly organized. It boasts many religious places and workshops for raw material processing as well as construction of objects such as the ceramic workshop with a furnace next to it, and a furnace for bronze. It also has great storage capabilities, as shown by the jars for the preservation of mountain products, including the famous herbs of Psiloritis and wool.
The palace complex of Zominthos, after a 20-year systematic excavation, which was started by the late Yiannis Sakellarakis and continues by Efi Sapouna-Sakellaraki, reveals more and more of its secrets every year.