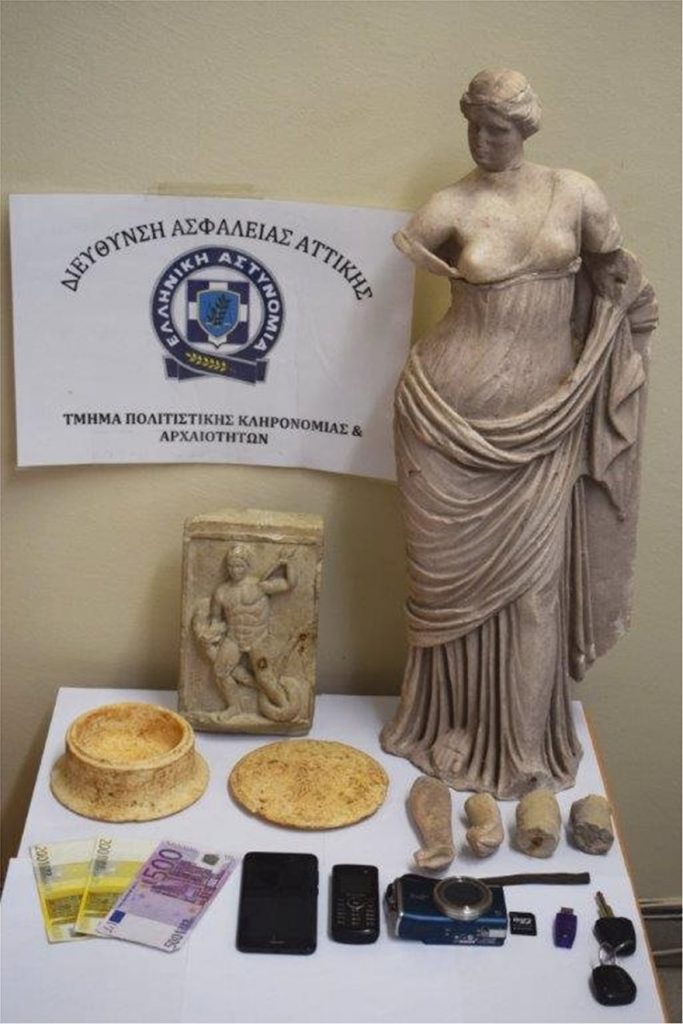 Hellenic Police in Loutraki on Wednesday arrested a man who was trying to sell a statue of ancient goddess Aphrodite that was stolen from the Thera Prehistoric Museum in Santorini.
The 46-year-old man was arrested shortly before he sold the statue for €350.000. Police found several other objects of great archaeological value in his possession.
Specifically, in the 46-year-old’s car, police found a Roman marble statue of Aphrodite wearing a chiton. It is 80 centimeters tall and archaeologists estimate it dates to the 2nd or 1st century BC.
The statue was stolen from the storage facilities of the Thera Prehistoric Museum in Santorini where it was kept. It was recognized by staff of the Cyclades Ephorate of Antiquities and the head of the Museum.
In the man’s possession were also the marble body of a cylindrical compass that belongs to the Hellenistic period, 14 centimeters in diameter and 6 centimeters high, decorated with embossed stripes. There is also the compass cover, which is 17 centimeters diameter and 2 centimeters high, and decorated with a fish bone pattern.
In addition, there is a stone measuring 25 centimeters in length and 14 centimeters high, carved on the four sides with depictions of Hercules with Lernaia Hydra, an antiquity that dates to the 3rd century AD.
Along with the stolen antiquities, police seized a digital camera, four memory cards, two mobile phones, a usb stick, €900 in cash, and the vehicle used for the transportation of the stolen goods.
The seized antiquities will be handed over to the Corinth and Thera Prehistoric Museums, respectively, while the antiquities trafficker will be taken to the Corinth Prosecutor’s Office. In addition, police identified two accomplices and criminal charges have been brought against them.

A record number, over 700, sea turtles died in Greece in 2020, according to a report published by ARCHELON.
Greece