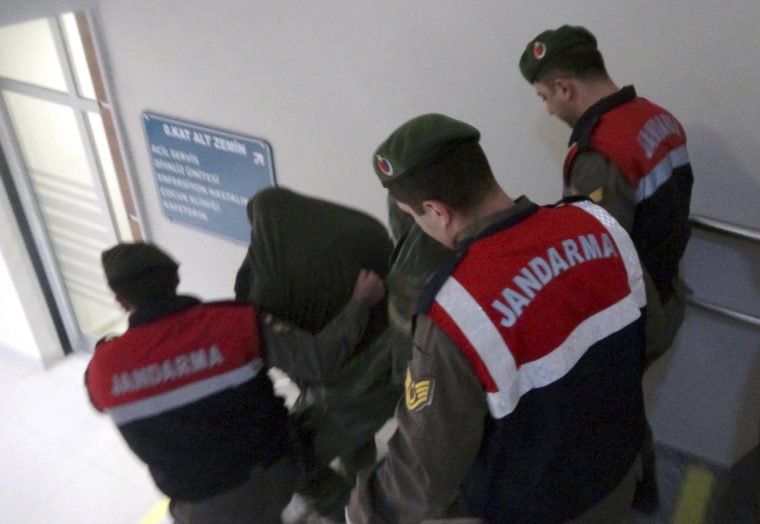 A government jet has flown two Greek soldiers — Second Lieutenant Angelos Mitretodis and Sergeant Dimitris Kouklatzis — home from Turkey after they were released following 167 days in a Turkish prison.
Dressed in uniform, the two men were greeted with a military salute as they disembarked the jet at Thessaloniki, northern Greece in the early hours of Wednesday morning — on the Aug. 15 holiday which marks the Dormition of the Virgin Mary.
The date of the two men’s release prompted Defense Minister Panos Kammenos to tweet an icon of the Virgin Mary.
Media reports quoted Kammenos as saying: “This is a great day for our motherland, the day of Our Lady, the day of Tinos in 1940 … I hope that their release … will herald a new day in Greek-Turkish relations. We can live together peacefully, for the benefit of both our peoples.”

The two men themselves said little, with Mitretodis simply saying “thank you” to reporters.
The Greek soldiers had been detained in Adrianople (Edirne) after they mistakenly crossed the Turkish border in poor weather at the Evros river on March 1. After 167 days, a Turkish court said that there were no grounds to continue to hold them. There were no restrictions placed on their movement, meaning they could return to Greece.
The news was welcomed by Greek PM Alexis Tsipras and by European Commission President Jean-Claude Juncker who tweeted:

Delighted by the news of the imminent release of the 2 Greek soldiers detained in Turkey. As I said in Varna,Turkey has nothing to fear from its European neighbours. The EU will remain engaged in this strategic partnership. We want to see a democratic, stable & prosperous Turkey.

On Wednesday, Tsipras said: “The release of the two Greek soldiers is an act of justice, which will help to strengthen friendship, good neighborliness and stability in the region. I want to congratulate and thank our two officers and their families for their vigor, patience and confidence in the efforts of all of us, who have finally been justified.”
The case caused considerable tension between Athens and Ankara, with Kammenos only last week claiming the two men had been taken on the orders of Turkish leader, Recep Tayyip Erdogan. Turkish ally Qatar recently offered to act as an intermediary.
Turkey’s president had explicitly linked their case with that of the eight Turkish soldiers seeking asylum in Greece after fleeing their country following the July 2016 coup attempt.