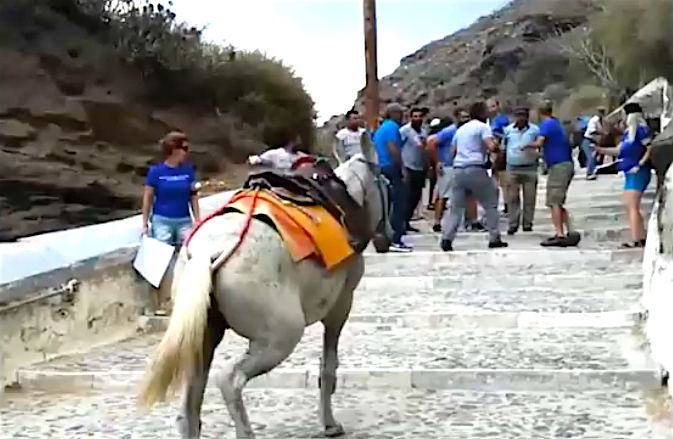 Last week, while organizing a protest against the mistreatment of the donkeys on Santorini, the Athens branch of Direct Action Everywhere claims that they were violently confronted by a group of around 30 donkey owners.
The claim states that before their protest even began, muleteers kicked, punched, shoved and spit on the animal rights activists.
The protestors claim that the donkeys, which are used to ferry passengers up a steep hillside from cruise ships, are being forced by their owners to hull overweight tourists and work in hot weather without proper care. 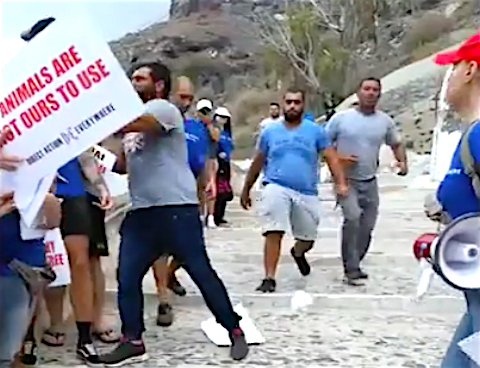 The protesters, who had gathered for a peaceful demonstration, filmed the shocking event as it happened – even catching a donkey owner in the act of chasing a protester down the iconic narrow streets of Fira.
The Athens branch of Direct Action Everywhere said that they stopped filming the attack as they were afraid for their lives, since the donkey owners continued to threaten to physically confront them.
Elisavet Chatzi, 45, from Athens, said the group of men even attacked her 16-year-old daughter, the U.K.’s Daily Mail newspaper reported.
“There were about 30 men that attacked us – there was just 10 of us campaigners, most of us women,” she said.
“They were hitting us, punching us, kicking us, they even threw our phones and bags over the cliff.”
In May, a report in the U.K.’s Daily Mail newspaper claimed that the donkeys make four or five return journeys a day during the height of the tourist season, often in temperatures of more than 30C (86F).
Also, there were reports that animals were left to lick shadowy parts of nearby stone walls in an attempt to find moisture to relieve their thirst.