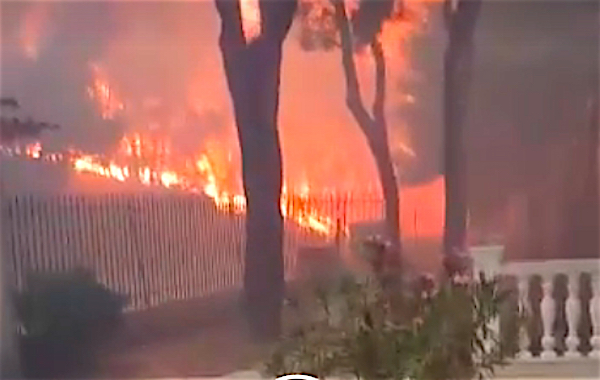 The video of a man who survived the fires in Mati after his house was surrounded by flames has gone viral in Greece.
The owner of the house went outside to save his cat. However, the flames approached so fast that they surrounded the building in no time.
In the video one can hear the wind blowing at an incredible speed, house alarms and the booming sounds of explosions, while the sound of the flames burning homes and trees sounds creepy in the background.
The homeowner is looking for a way out, but there is no escape as the fire encircles the house at great speed. The man calls his cat to go near him to protect her, and in a few seconds the flames that were outside the house’s yard wall are now inside the yard.
Soon, the house is bathed in flames with pieces of burned pine trees falling from the sky. The man tries to cover himself, while sparks burn him.
Eventually, as it turned out, luck was on his side and he survived the fiery inferno, as the flames passed by him and continued their destructive work further down.
The flames lireally passed by him as he pinned his back against the wall of the house. Both he and his cat were saved.