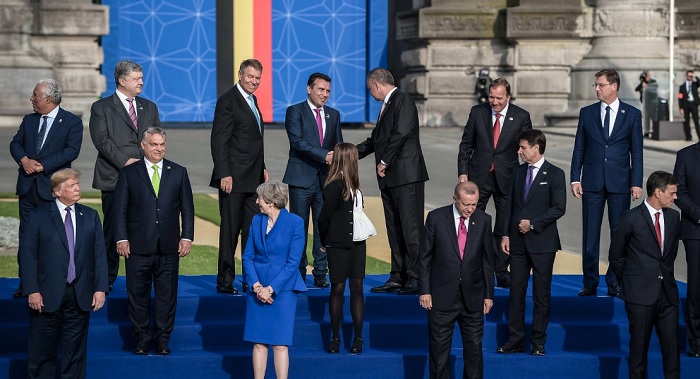 FYROM’s Prime Minister Zoran Zaev celebrated NATO’s decision to offer membership talks to his country on Thursday.
Zaev tweeted that “the decision means that the ‘Republic of Macedonia’ becomes member of the family.”

Membership of the alliance had been blocked over the long-running dispute about the country’s name, which saw Greece veto Skopje’s progress in joining NATO and the EU.
However, the recent deal between Greece and FYROM to rename the state ‘North Macedonia’ – while still unratified – has apparently seen NATO extend an offer to begin negotiations.
FYROM’s membership is conditional on the deal with Greece being successful.
The following is an extract from Brussels Summit Declaration of 11-12 July related to FYROM
“At our 2008 Bucharest Summit, we decided that NATO will extend an invitation to the former Yugoslav Republic of Macedonia to join the Alliance as soon as a mutually acceptable solution to the name issue has been reached within the framework of the UN.
We welcome the historic agreement between Athens and Skopje on the solution of the name issue.
In line with our policy, we have decided to invite the government in Skopje to begin accession talks to join our Alliance.
Full implementation of all prescribed internal procedures with respect to the agreement on the solution of the name issue is a condition for a successful conclusion of the accession process.
We commend the government for significantly strengthening good neighbourly relations, including the entry into force of the Treaty on Friendship, Good Neighbourliness, and Cooperation with Bulgaria.
We welcome the determined efforts by the new government over the past year and the substantial progress that has been achieved on a number of urgently needed reforms and encourage further efforts on reform before and after accession in order to enhance the country’s contribution to the Alliance.
We also note continued efforts to build a functional multi-ethnic society based on full implementation of the Ohrid Framework Agreement and encourage further efforts in this area.
We call upon all political leaders in the country to play a constructive role in these processes and in the speedy implementation of the agreement on a solution to the name issue.
We appreciate Skopje’s steadfast support for NATO’s operations and missions and ongoing contributions to international security.”