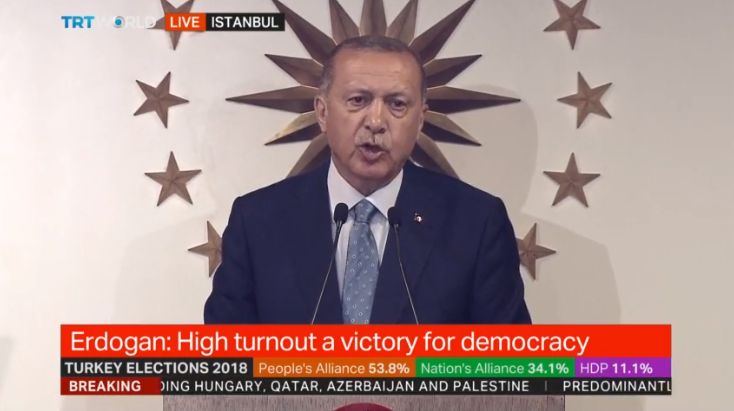 Turkey’s Recep Tayyip Erdogan has claimed victory in Sunday’s presidential election despite opposition parties insisting all the votes have not yet been counted.

Erdogan’s speech was broadcast shortly before 11 p.m. local time (2000GMT). As he was speaking, Turkey’s Supreme Electoral Council’s website was down and the country’s opposition was claiming only 56 percent of the vote had been counted.

However, hours earlier Turkey’s state-run media outlets had been reporting Erdogan had won more than 50 percent of the vote, negating the need for a second-round run-off.

The leaders of Azerbaijan, Hungary and the Palestinian Authority earlier sent their congratulations to Erdogan.

“Unofficial results of the election are clear,” Erdogan said on state broadcaster TRT. “Our nation has bestowed the election upon me. We have also won the majority in parliament.”

However, the AK Party’s electoral allies — the ultranationalist MHP, which had been riven by a major split last year — unexpectedly performed well, which could see their lawmakers prop up Erdogan’s party.

The result will be a centralized presidency with Turkey’s parliament largely rubber-stamping decisions made by Erdogan personally.