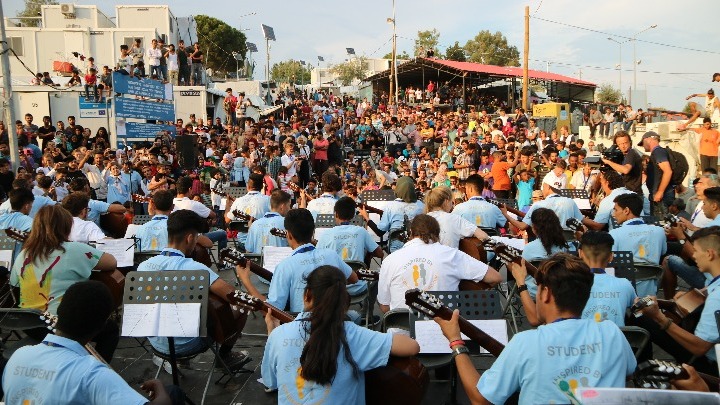 The island of Lesvos, currently home to almost 10,000 asylum-seekers, will mark World Refugee Day on Wednesday, June 20 with a series of three concerts by the refugee children’s orchestra “Connect By Music”.
With the participation of youngsters currently living at the refugee reception centres and the “Iliaktida” shelters on the island, around a core of 30 guitars, keyboards and percussion instruments, the concerts are performed with the accompaniment of internationally acclaimed musicians, including soloist Nawras Al Taky on vocals and oud and Jeroen de Groot on violin.
The first of was held on Monday in the Moria camp, the second will be held on Tuesday evening at 19:00 at the Georgiadis Mansion in Mytilene, with free entrance for all.
The third concert will take place on Wednesday at 19:00 for the residents of the Kara Tepe camp near Mytilene, with entrance to outsiders by invitation only, and will be broadcast by the Netherlands state television channel.
In other events to mark World Refugee Day in Greece, there will be a special event as part of the Refugee Food Festival that is taking place in Athens and 13 other cities around the world – such as Paris, Brussels, Madrid, San Francisco, New York and Cape Town.
Anyone visiting the island of Lesvos on Wednesday will have the opportunity to taste dishes from Iraq, Syria and Pakistan at the cafe-restaurant Nan in the town of Mytilene, which was founded by four women seeking ways to cooperate and find solutions that will benefit both refugees and locals.
Source: AMNA