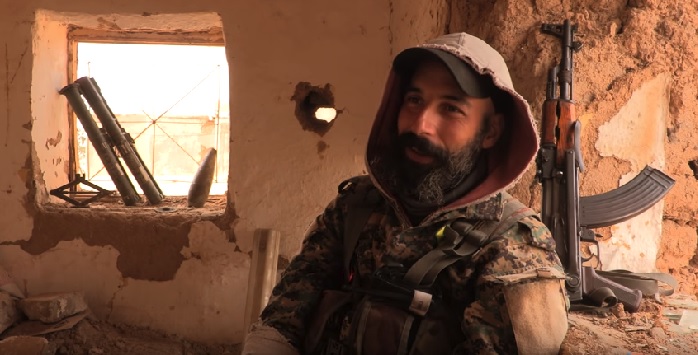 A Greek anarchist, a member of the Rouvikonas (Rubicon) group, who traveled to Syria to fight the Islamic State terror group (ISIS) has spoken on camera about his experience of the war and the reasons that made him join the fight.
Nikos Mataragas’ testimony is in the documentary Belkî Sibê (Maybe Tomorrow): A Journey Through War and Revolution, created by Alexis Daloumis and the Shadow Crew, and released recently.
Mataragas, speaking against a backdrop of a half-destroyed building and with a Kalashnikov resting behind him, talks about his experiences in Raqqa.
He says he received weapons training only for a month before taking part in the fighting. He also says he spent seven months on the front, fighting alongside a group called the International Freedom Battalion, participating in many battles, including some where his colleagues were killed.
It was a painful experience, he says, but it made him more determined to carry on fighting ISIS.
The Greek volunteer says that his family’s communist background made him to want to defend the weak.
His upbringing made him an internationalist: “In our home we never had the Greek flag”, he says, although he denies he is anti-Greek.
Growing up, he decided to follow a different course from his parents and began to describe himself as an anarchist.
Mataragas claims that although he is member of Rouvikonas, the decision to go and fight in Syria was his alone.
Video in Greek