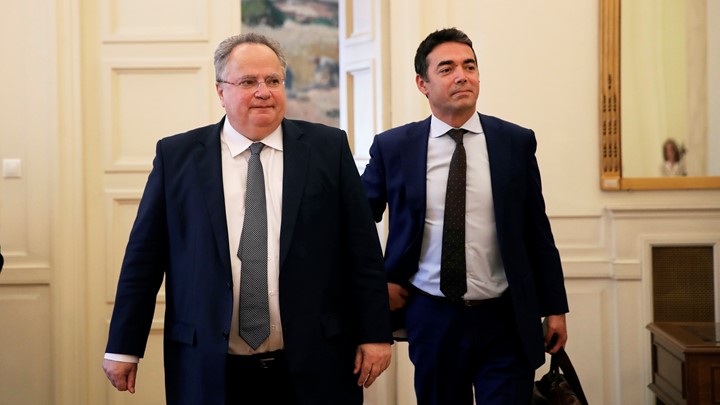 The FYROM name agreement has been passed from the hands of foreign ministers to the prime ministers level, said Greek Foreign Minister Nikos Kotzias on Monday, following talks with Skopje counterpart Nikola Dimitrov.
The two officials met in Brussels with the intermediation of United Nations representative Matthew Nimetz. Kotzias told reporters, after the meeting, that technical and legal issues will be discussed over the next few days, according to the Athens News Agency (ANA).
After the technical level talks, Greek Prime Minister Alexis Tsipras and his FYROM counterpart will make the final negotiations on  the naming issue.
“As soon as the technical and legal issues have been clarified and the texts are  prepared at the level of foreign ministers, they will be given to the two prime ministers, who will discuss with each other and reach a final agreement,” Kotzias said.
Earlier, Dimitrov, in statements to the MIA agency, said the foreign ministers of the two countries had reached a compromise.
“We had a productive meeting and we have a compromise framework text to be drafted today,” Dimitrov told MIA.
Maximos Mansion suggests “patience”
“The two foreign ministers have made significant progress, but the negotiations are not over — they are at their most crucial turning point,” a government official knowledgeable of the FYROM name negotiations told ANA.
“Some people are hurrying to say hop, even before Skopje jumps the ditch. Patience and coolness until the June Summit,” the Greek official said.