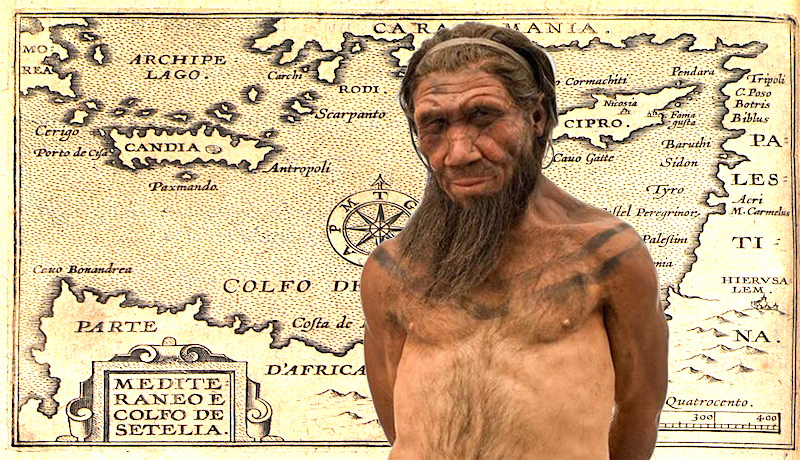 Excavation finds in Crete in 2010 indicate that man traveled the Mediterranean 130,000 years ago, and not 10,000 years ago as originally believed, according to Science magazine.
In an article entitled “Searching for a Stone Age Odysseus”, it says that up until a decade ago, archaeologists assumed that the adventurous travels of Odysseus, as reflected in Homer’s Odyssey, were the first ventures in the Mediterranean, placed 10,000 years ago. Or that sea travel was a human endeavor that started in the Bronze Age.
However, excavators in 2010 claimed to have found stone tools in Crete dating back at least 130,000 years, leading to assumptions that man traveled the seas as early as in the Neanderthal stage.
The recent find indicates that the Neanderthal was navigating the Mediterranean. After all, Crete was inhabited, and Crete has been an island for over five million years, meaning that the people who lived there, somehow sailed to Crete.
Between 2008-09, a Greek-American scientific team found in the southern coastal location of Plakias hundreds of stone tools, which are very similar to tools used by Homo erectus over at least a million years ago, and Neanderthals 130,000 years ago.
One of the investigators claimed that these tools are indicative of Neanderthals’ maritime migrations from the Near and Middle East to Europe. An attempt to date gear has led to an estimate of at least 130,000 years of age, but doubts about their age remained, which did not help to dissipate the skepticism of other scientists for such a bold theory.
Then there were other finds of probably Neanderthal origin, such as Stelida on Naxos, which, even in the last Ice Age, when the water level was lower, was estimated to be accessible only by sea. There, another Greek-Canadian team, discovered in a flint quarry hundreds of stone tools (more sophisticated than those of Crete in their method of construction), among which hand-tools that resemble tools made by both Neanderthals and Homo Sapiens 50,000 to 200,000 years ago.
The dating process of these tools is still in progress and is expected with interest. It can not be ruled out to confirm their age and thus give more credibility points to the assumption that there were even more ancient seafarers in the Aegean.
Other paleolithic tools have also been discovered on the Ionian Islands, mainly on Zakynthos and Kefalonia. This, according to the archaeologists, shows that people were going to the islands much earlier than initially thought.
But for some islands, there are doubts about when they were cut off from the land and became islands. Such as e.g. is the case of Lemnos, where archaeologist Nikos Efstratios of the Aristotle University of Thessaloniki believes he has found a Paleolithic hunting camp which is over 10,000 years old.