Tsipras on FYROM Name: Great Victory to Put Designation Before the Term "Macedonia" 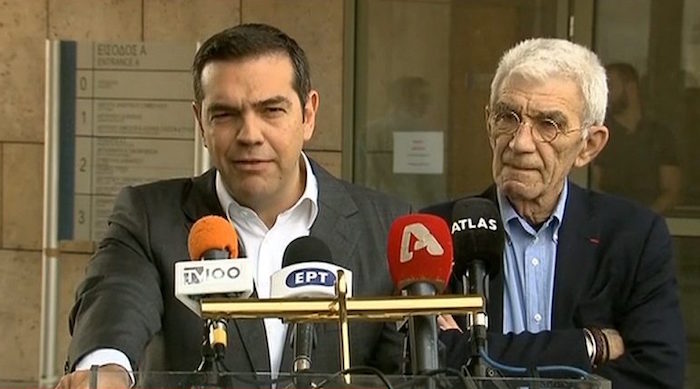 Greek Prime Minister Alexis Tsipras on Friday said it would be a great victory to put a designation before the term “Macedonia” in the name of the Former Yugoslav Republic of Macedonia.
Tsipras spoke after a meeting with Thessaloniki Mayor Yiannis Boutaris, where they discussed the negotiations between the foreign ministers of Greece and FYROM on the name of the Balkan country, with the mediation of UN representative Matthew Nimetz.
“Skopje is called Macedonia” for the past 70 years,” the prime minister said, adding that it will be a great victory for Greece to have the neighboring country put a designation — geographical or other — before the term “Macedonia”.
“We are in a negotiation that is sensitive, critical, and we have made steps forward,” Tsipras said. “We are defending a national position and since I am here in Thessaloniki and Macedonia I will say this too, because I hear some people who say do not give out the name to them… Here we seek to take something back, not give out something that had been surrendered by others, not by us, 70 years ago.”
“Our northern neighbors,” the prime minister continued, “for over 70 years have a state identity called “Macedonia”, either within the framework of the Yugoslav federation or as an autonomous state later, after the dissolution of Yugoslavia. Without any designation, it is a name that refers to the ancient Greek world and to the heavy cultural heritage of Greek Macedonia. That’s what we’re going to take back. It’s not easy. Some fools say we go to give out something. But what we are doing is we try to take something back.”
“We believe that (our neighbors’ Macedonia and our Macedonia) are two different things and we think it is time to coexist, cooperate and live in peace for the benefit of our region,” the prime minister concluded.