Violence and Lawlessness Create a Republic of Fear in Greece 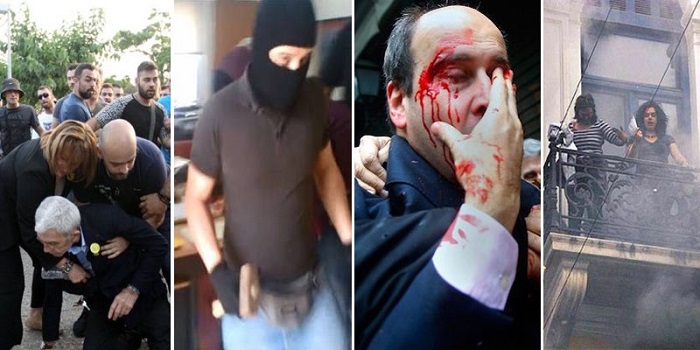 The shocking weekend mob attack on elderly Thessaloniki mayor, Yiannis Boutaris, is the latest incident of politically motivated violence to have underscored a widespread sense of lawlessness in Greece.
Boutaris has repeatedly angered hardliners with controversial and blunt statements on Macedonia, Turkey and Israel. In a recent exclusive interview with the Greek Reporter, he used inappropriate language to justify his policy of turning Thessaloniki into a hub to attract Turkish tourism, culture and business.
Boutaris said that Thessaloniki had opened its doors to Turkey because it is the birthplace of the founder of Turkish republic, Mustafa Kemal Ataturk. Ataturk’s family home is now a museum visited by thousands of Turks every year.
In a somewhat ham-fisted attempt to draw a line underneath the past, Boutaris said he was not concerned whether the founder of the modern Turkish state had committed crimes against Asia Minor Greeks during the 1919-1922 Greco-Turkish War.
“I don’t give a s*** whether Ataturk killed Greeks,” Boutaris said.
This sentence from the interview has been used by hardliners as justification for Saturday’s attack on an elected, 75-year-old politician which took place during a ceremony in Thessaloniki to commemorate the Pontian genocide.
Boutaris was shouted and sworn at, had plastic bottles and bins hurled at his back as his very small security detail tried to hurry him away from what was meant to be a solemn day of remembrance.
That some of his attackers wore masks and thought nothing of striking at him from behind underlined the indignity of the incident, which was played out in the presence of children.
Most say that although Boutaris’ choice of words was unwise, there is no justification for physical violence which runs counter to any sense of free speech, the rule of law and democratic norms.
Here is the Boutaris’ interview in its entirety. The controversial comment appears at around 00:25″

Since the onset of the economic crisis, extreme nationalists on the right — mirrored by self-appointed revolutionaries — on the left have been bullying, harassing and occasionally assaulting their opponents.
Golden Dawn extremists terrorize immigrants in poverty-stricken suburbs of Athens and other big cities, whereas anarchist and leftist groups, such as Rouvikonas, target foreign embassies, state institutions and private businesses, often traumatizing ordinary employees in the process.

Clashes between anarchists and the police in the infamous Exarchia neighborhood of Athens are an almost daily routine, making life hell for ordinary working-class residents.
Both sides of the political spectrum have played a part in legitimizing the views and behavior of Greeks who choose to verbally and physically attack those who hold different views.
In May 2010, three people died after riots in Athens as the Marfin Egnatia bank was set on fire with its workers inside. The culprits, believed to be leftists who threw petrol bombs at the building, were never identified.

In December 2010 former minister Kostis Hatzidakis, was left with blood pouring from his head after being chased and beaten by dozens of protesters.
He was set upon by up to 100 youths, who shouted “Thieves” and “Shame on you” when he emerged from the Greek parliament building in central Athens.

In November 2015 Giorgos Koumoutsakos, a New Democracy lawmaker, was assaulted during a rally for Pontic Greeks in Athens by suspects believed to have links to Golden Dawn.
The conservative lawmaker blamed the neo-Nazi party for the attack at the rally, which was attended by several Golden Dawn lawmakers.