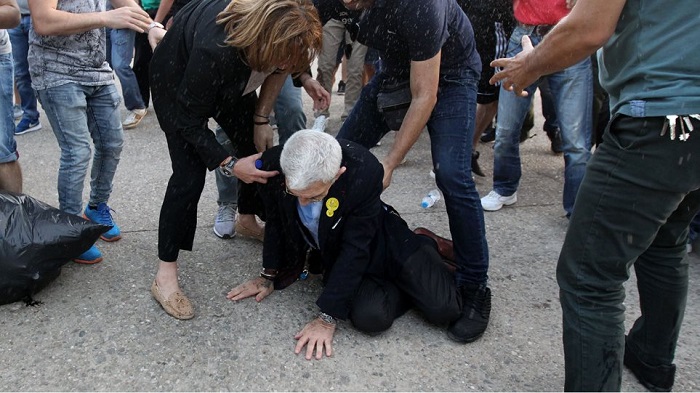 A mob, believed they were right-wing extremists, attacked and injured the mayor of Thessaloniki, Yiannis Boutaris, during a ceremony to commemorate the Pontian genocide on Saturday.
The 75-year-old mayor was punched and kicked as he fell to the ground by several men attending the ceremony, some of whom were wearing hoods.
Two of his aides helped his escape, while the mob continued to chase and tried to attack him again. They were throwing water bottles, stones and other items at the mayor.

He was rushed to the hospital where he remained overnight. Doctors say that it was a precautionary move and that he will be released later on Sunday.
“It was a nightmare,” said a clearly shocked Boutaris after the attack. “There were several people that attacked me. They were hitting me everywhere”.
He refused to lay blame to the Pontians. “They were not Pontians. Pontians are my friends,” he said and promised to speak more about the incident and what triggered it on Monday.
Kalypso Gioula, the chairman of the city council who was accompanying the mayor said that the mob was beating and kicking Boutaris even when he was on the ground.
“They wanted to harm him, they were beating him on the head, they even beat me and his police guards,” she said. Gioula pointed out at the absence of police and of organizers during the attack, “the mayor was not protected.”
Boutaris has been a supporter of closer ties between Greece and Turkey.