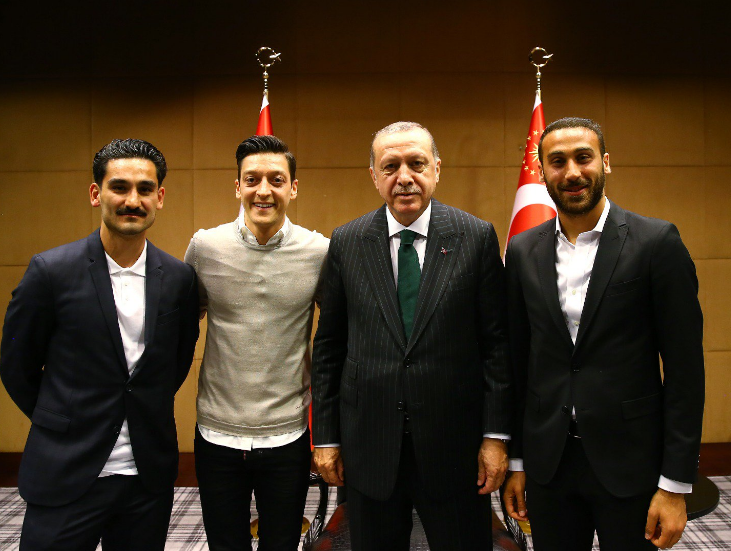 On Tuesday, as Germany unveiled its football squad for June’s 2018 World Cup in Russia, two of best-known players are facing a storm of criticism for meeting Turkey’s president Recep Tayyip Erdogan.

Turkish-origin footballers Mesut Ozil and Ilkay Gundogan, joined by Turkish national Cenk Tosun, met and posed for photos with Erdogan, who was in London on an official visit.

They also presented the Turkish president with replica shirts from their clubs.

All three athletes play in the English Premier League but Arsenal’s Ozil and Manchester City’s Gundogan now face a backlash from the German footballing authorities, fans and politicians alike for meeting the controversial Turkish leader.

“The DFB naturally respects the special situation of our players with a migration background. But football and the DFB stand for values that are not sufficiently respected by Mr Erdogan.

“It is therefore not a good thing that our national players are being abused for his campaign manoeuvres. Our two players certainly did not help the integration work of the DFB with this action.”

After Gundogan tweeted about meeting “my president” Turkish-origin German lawmaker Cem Ozdemir told local media: “The federal president of a German international footballer is called Frank-Walter Steinmeier, the chancellor is Angela Merkel and the parliament is called the German Bundestag.”

It remains to be seen if Ozil and Gundogan will be chosen by German manager Joachim Low to play for their country in Russia.